We were going to go to Old Trafford on Saturday. On Friday evening we went to meet my sister-in-law in Cambridge and the car broke down. The key wouldn't switch on the ignition. We had to get my brother-in- law to come out to take us to his house where we were staying overnight.
Next day we rang Mercedes roadside help and their man said the steering lock has failed. This means that when the key was put in it didn't release the lock as it normally would because it wasn't in fact locked. The car didn't know this and so said 'I'm not going anywhere with locked steering.'
We had to wait for the rescue vehicle then we went to th Botanical Gardens. We have been saying that we must visit it for many, many years.
The day was sunny and almost hot. No, it was hot. The gardens were very interesting. They have some incredible trees. There's a black walnut tree that is enormous. It must be very old indeed. The lake has a patch of gunnera and some bamboo too. However the place is so huge that it can take it and I suppose that they keep it under better control than it was in 'our' park! That part of the day was most enjoyable.
They had told us that our courtesy vehicle would be brought to us at 5o'clock. We got back to the place at 4:30 and by 5:30 there was no sign so I rang the hire company and they said they had 8:00 down. There is no way we would have agreed to that late. They then said they would have it there in 20 minutes. By 6:15 it arrived.
It is the Mercedes MPV and is like a building. The ride isn't all it could be either. It was like being in a boat on a choppy sea! We laughed all the way back to my brother-in-law's about the way it rolled.
So we didn't get to the match. We've just watched it on MUTV. Brilliant in the first half but they really struggled in the second half, but they have a terrible injury problem.

A small park near to us was looking very neglected and so I contacted the local council about it. It turned out that it was set up about 20 years ago on land donated by the owner of what was a farm. The land was an orchard, hence the name! Anyway, the council set it up and then handed it over to the community to look after. The council had a contract to cut the grass every now and again, and also to trim back the hedges a couple of times a year, but that was it.
Some of us who backed onto the park then started to tidy it up. We then learned that there was money left for its upkeep by its previous owner and so we started to buy some plants. Last Saturday we had a big planting day when several new people came along to help. We also planted a memorial pear tree to a gentleman who liked the park and used to walk his dog there. this was kindly donated by some friends of his and his widow and daughter came along for the planting ceremony.  Here are some photos that I took. 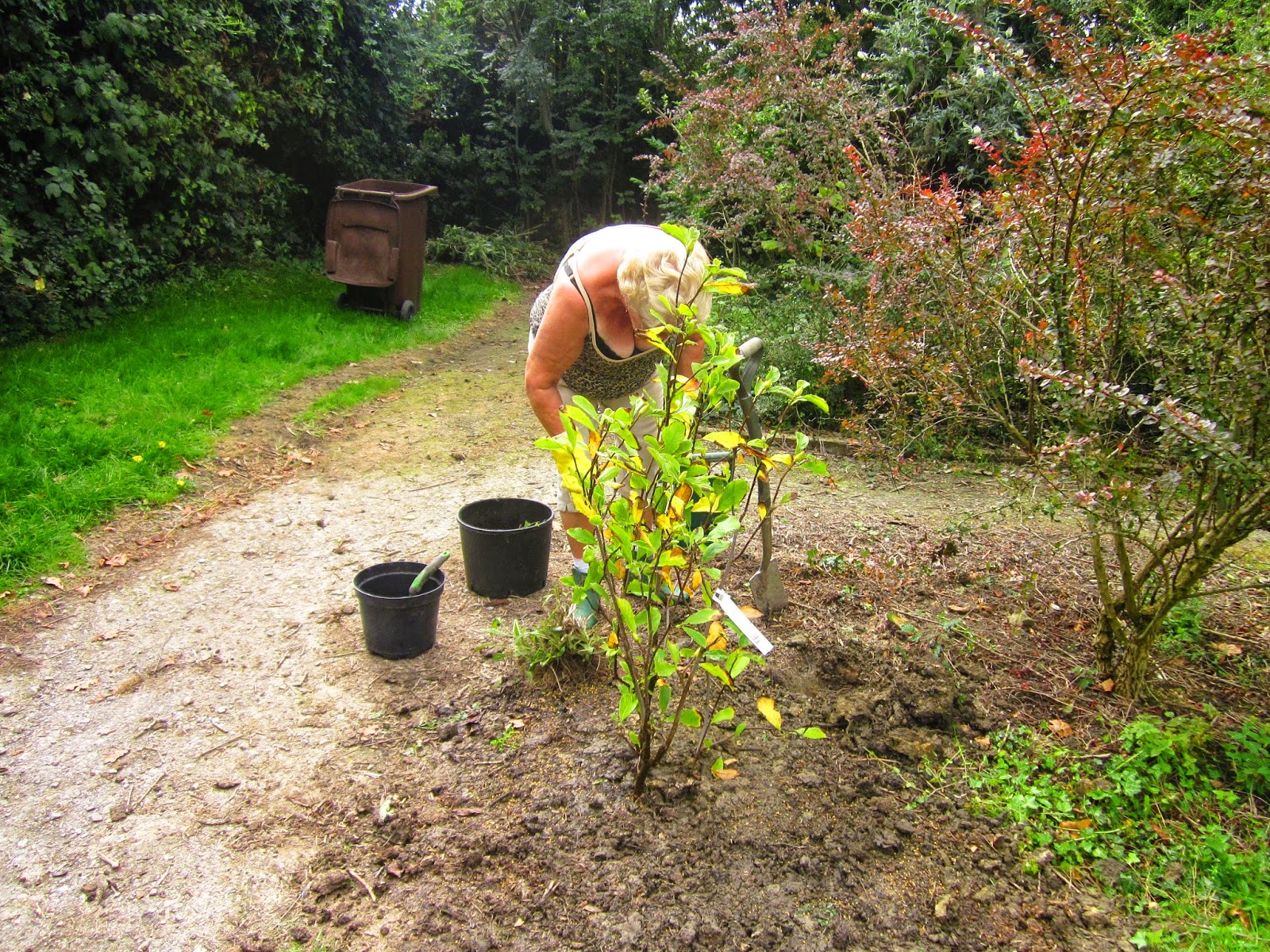 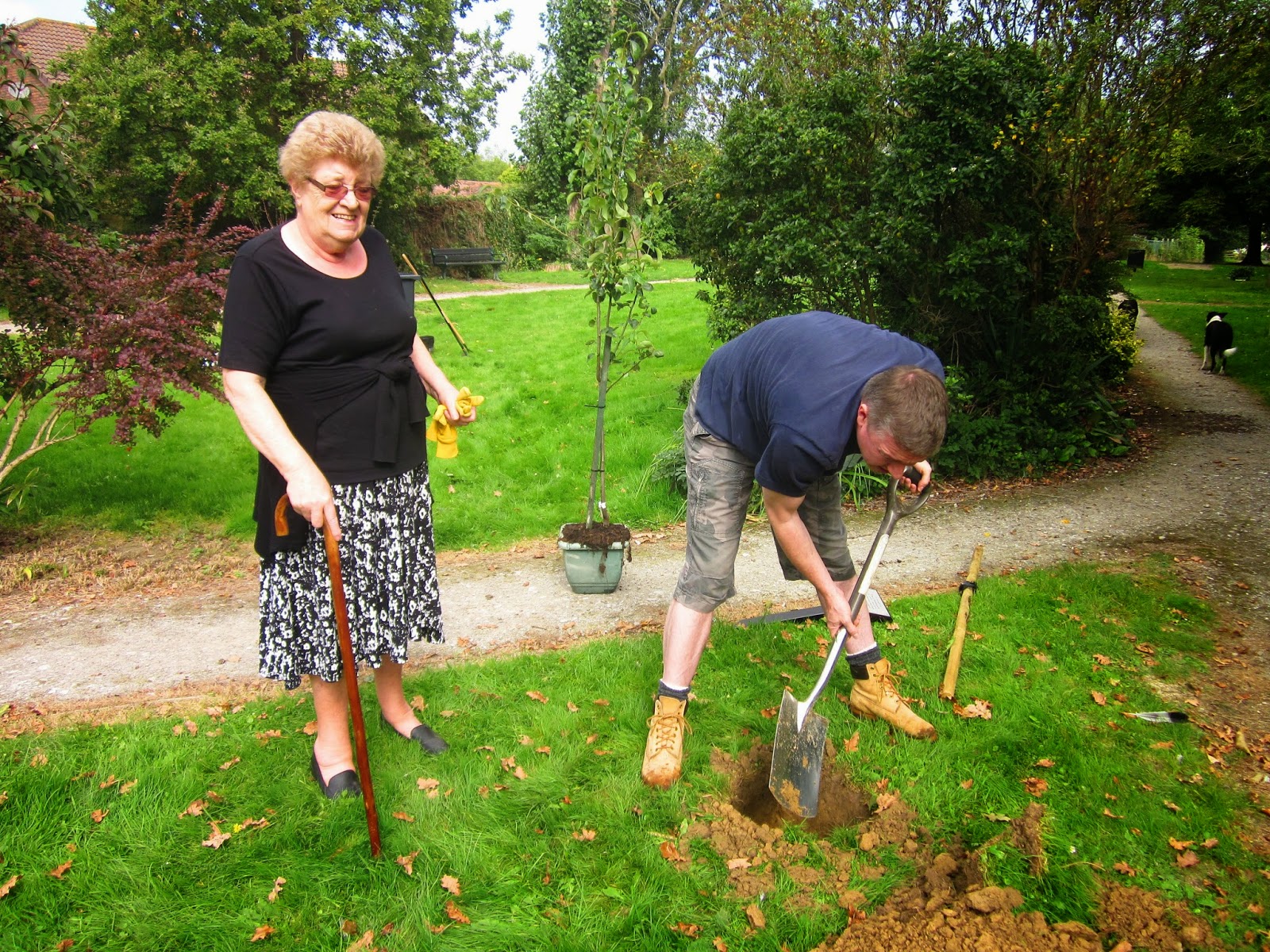 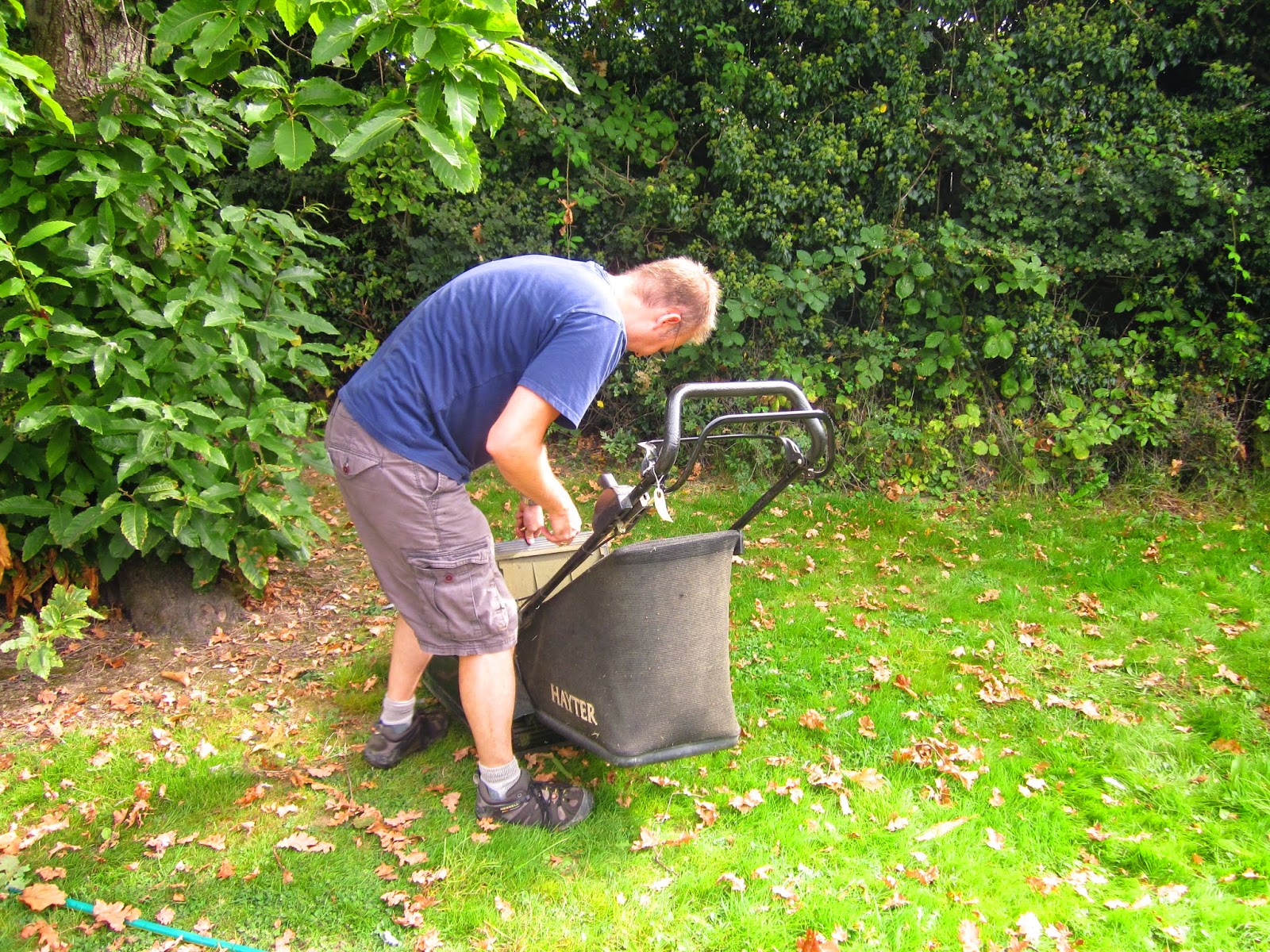 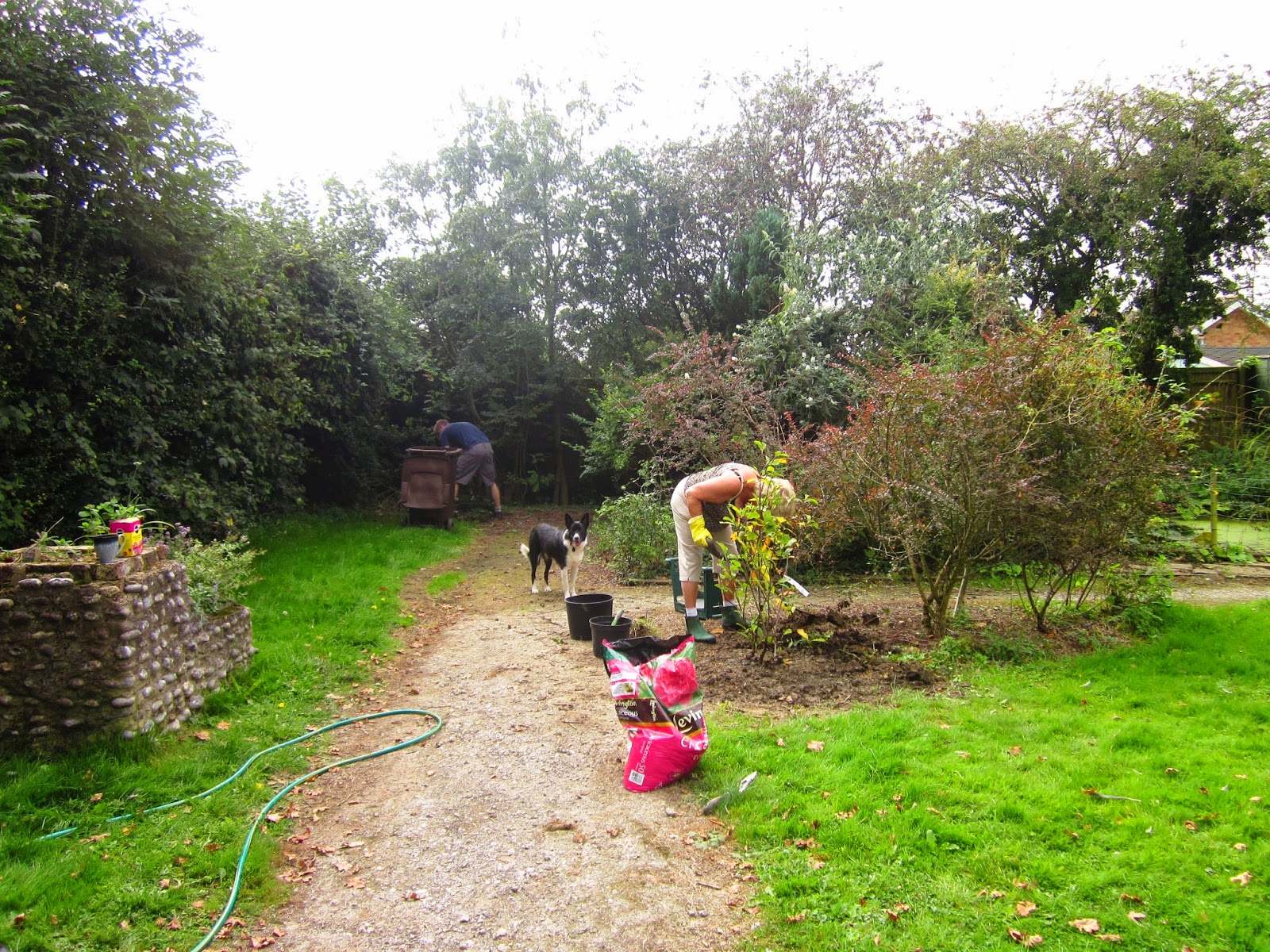 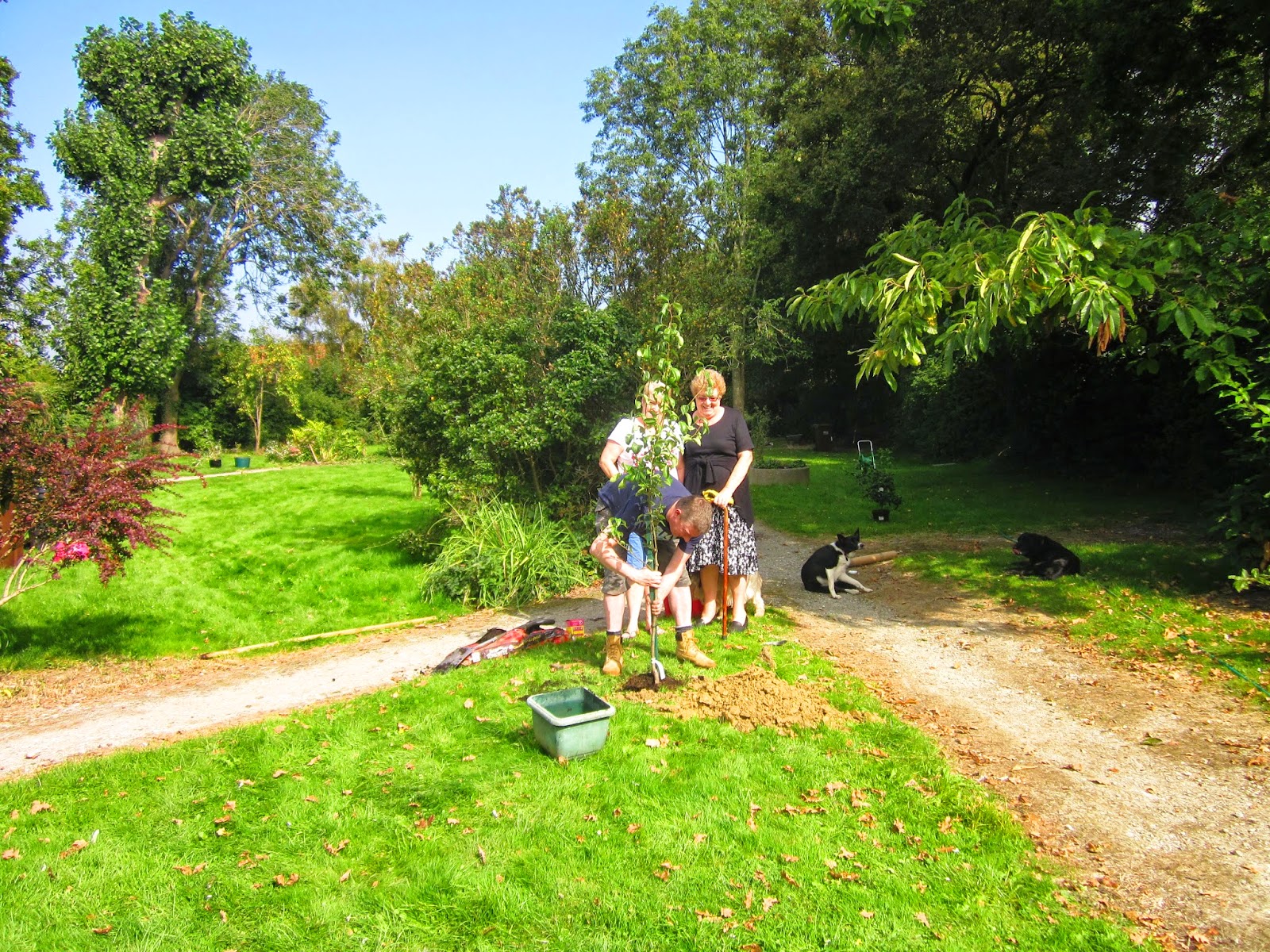 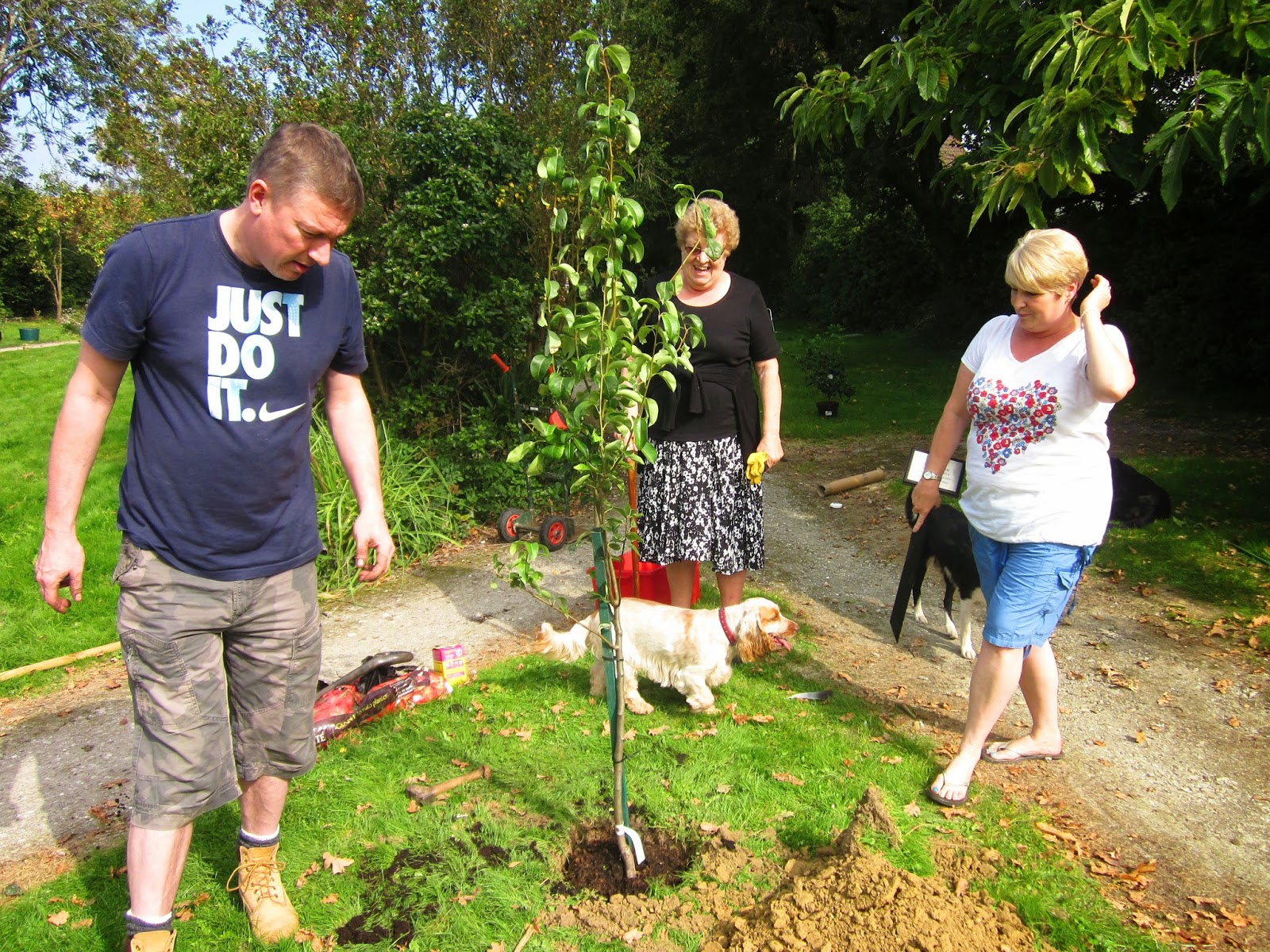 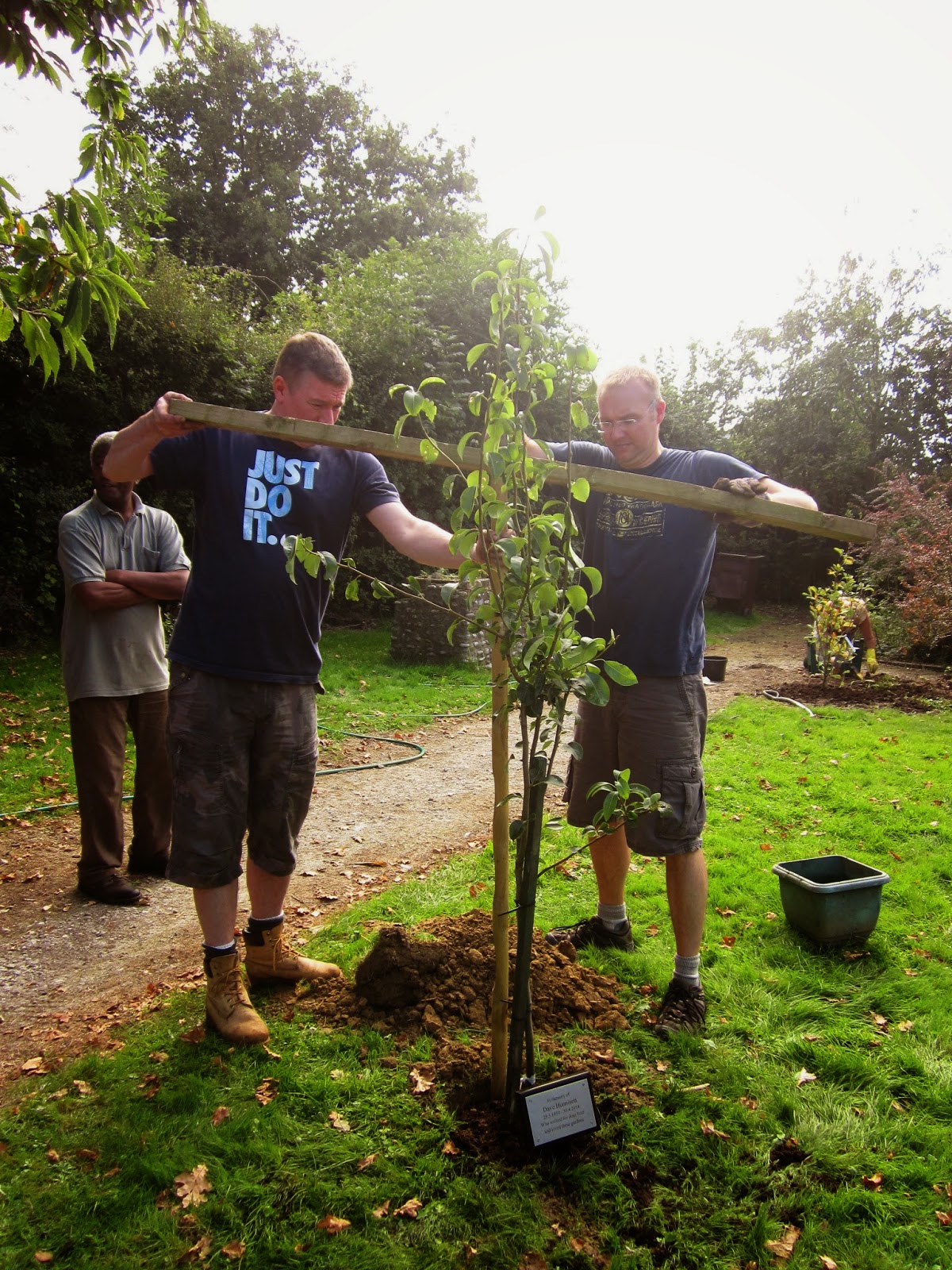 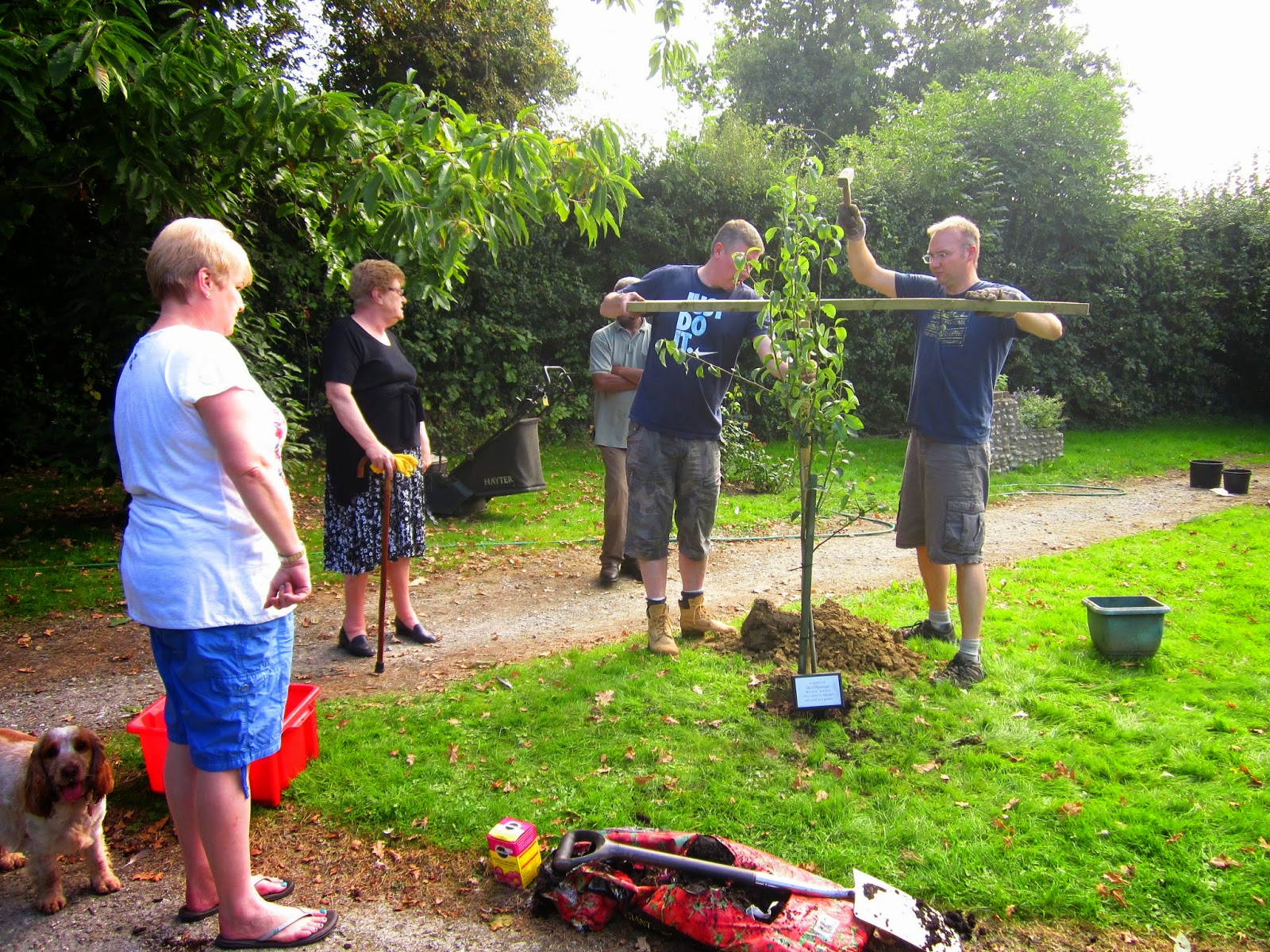 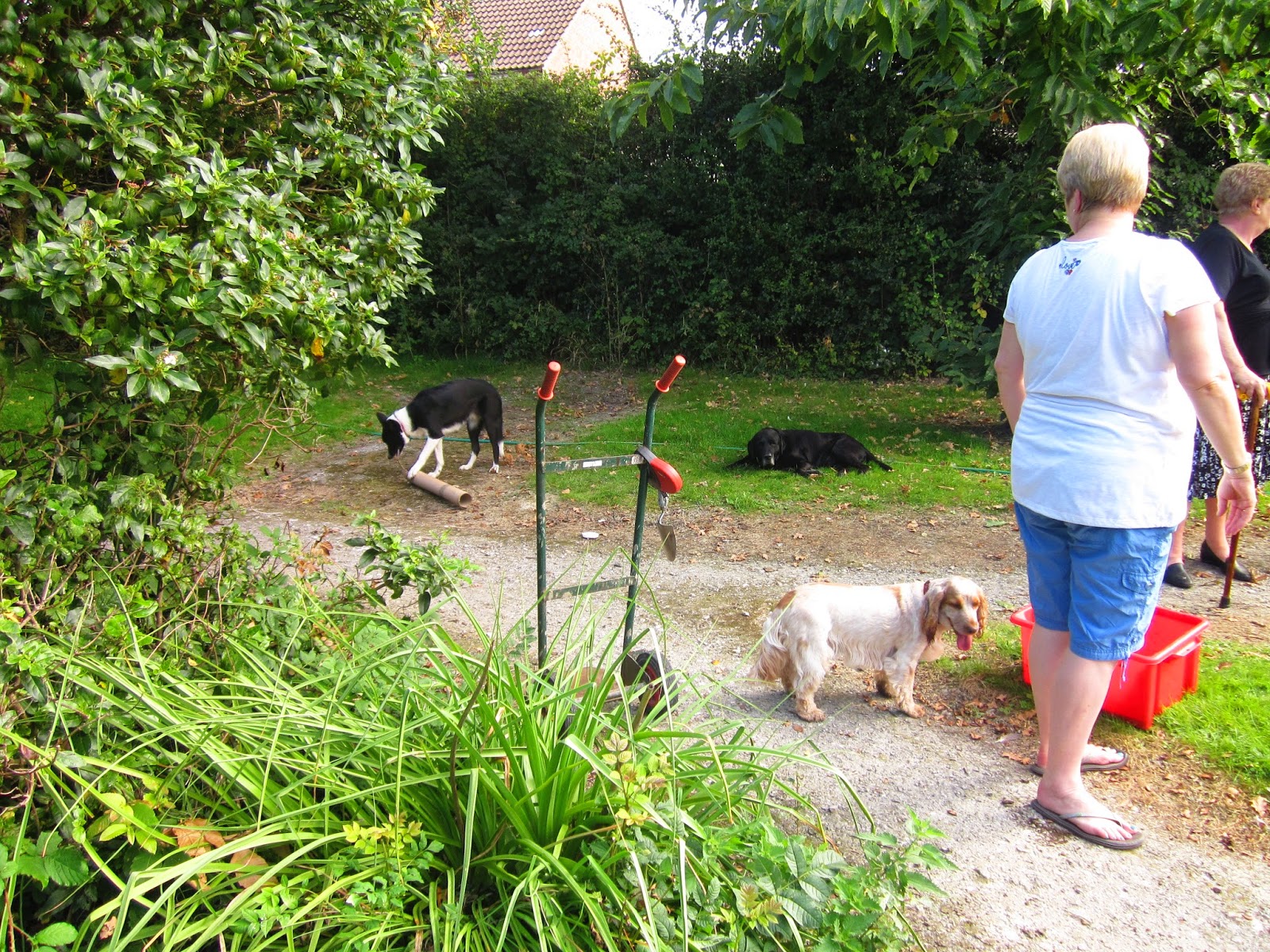 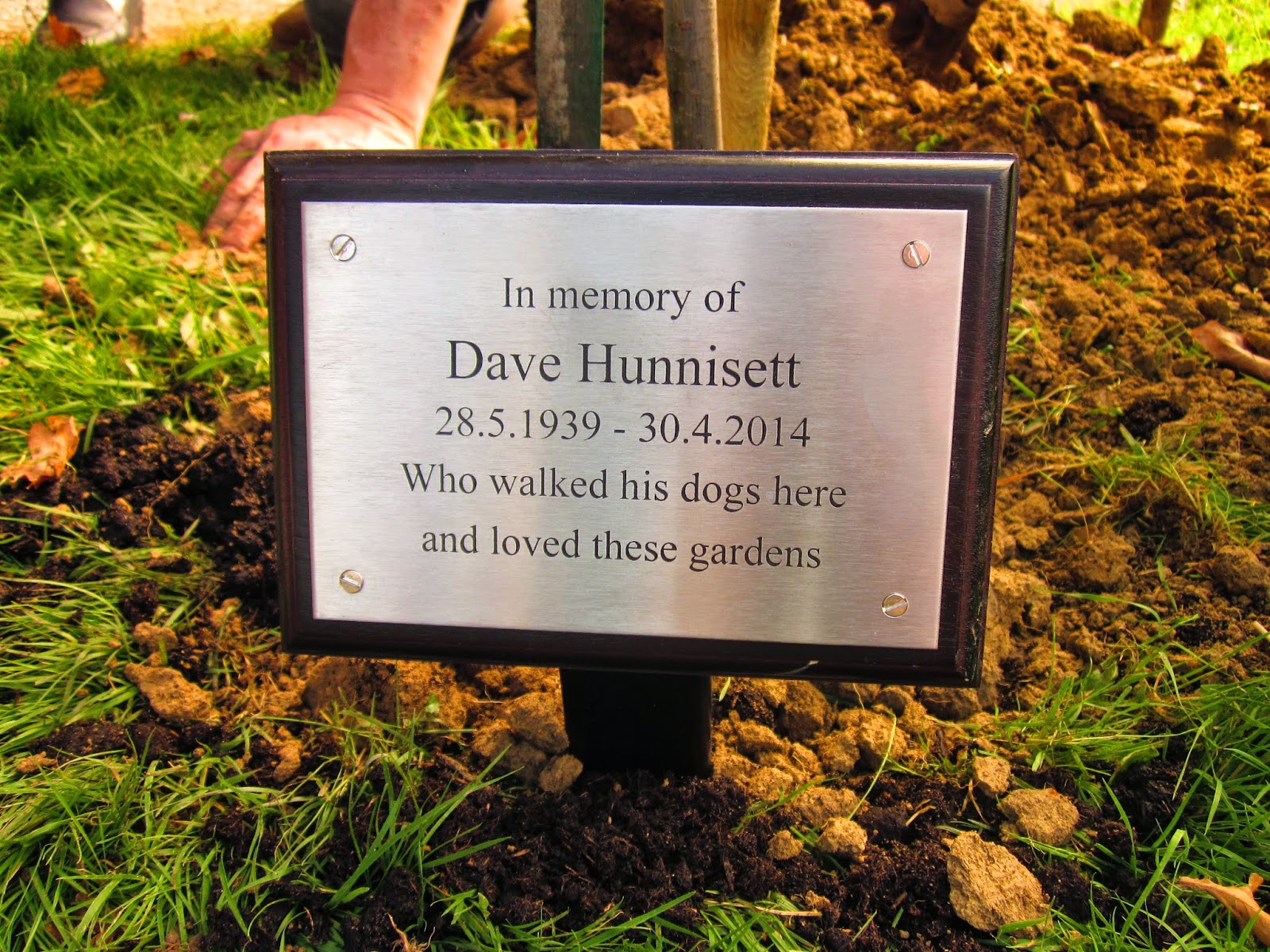 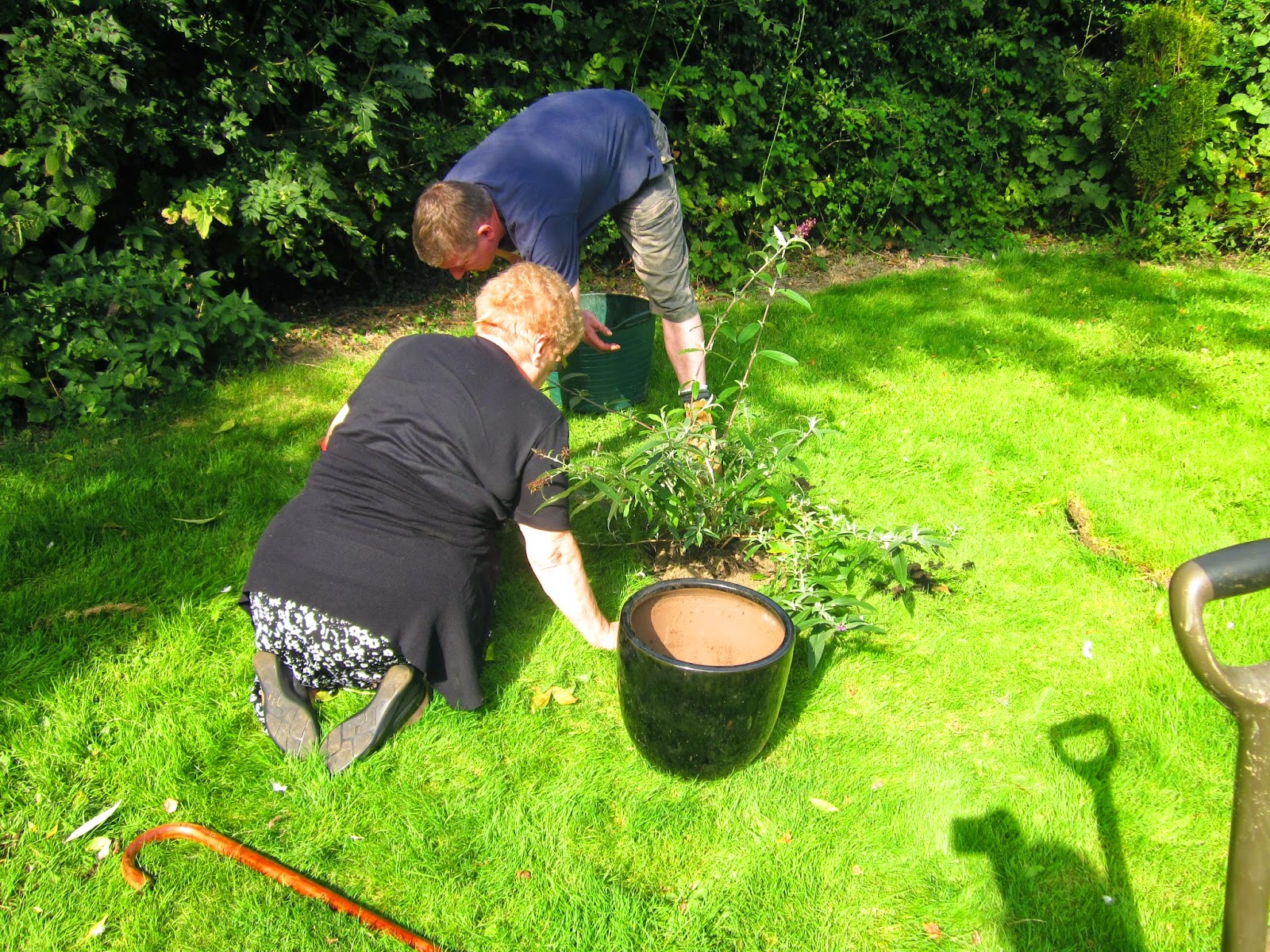 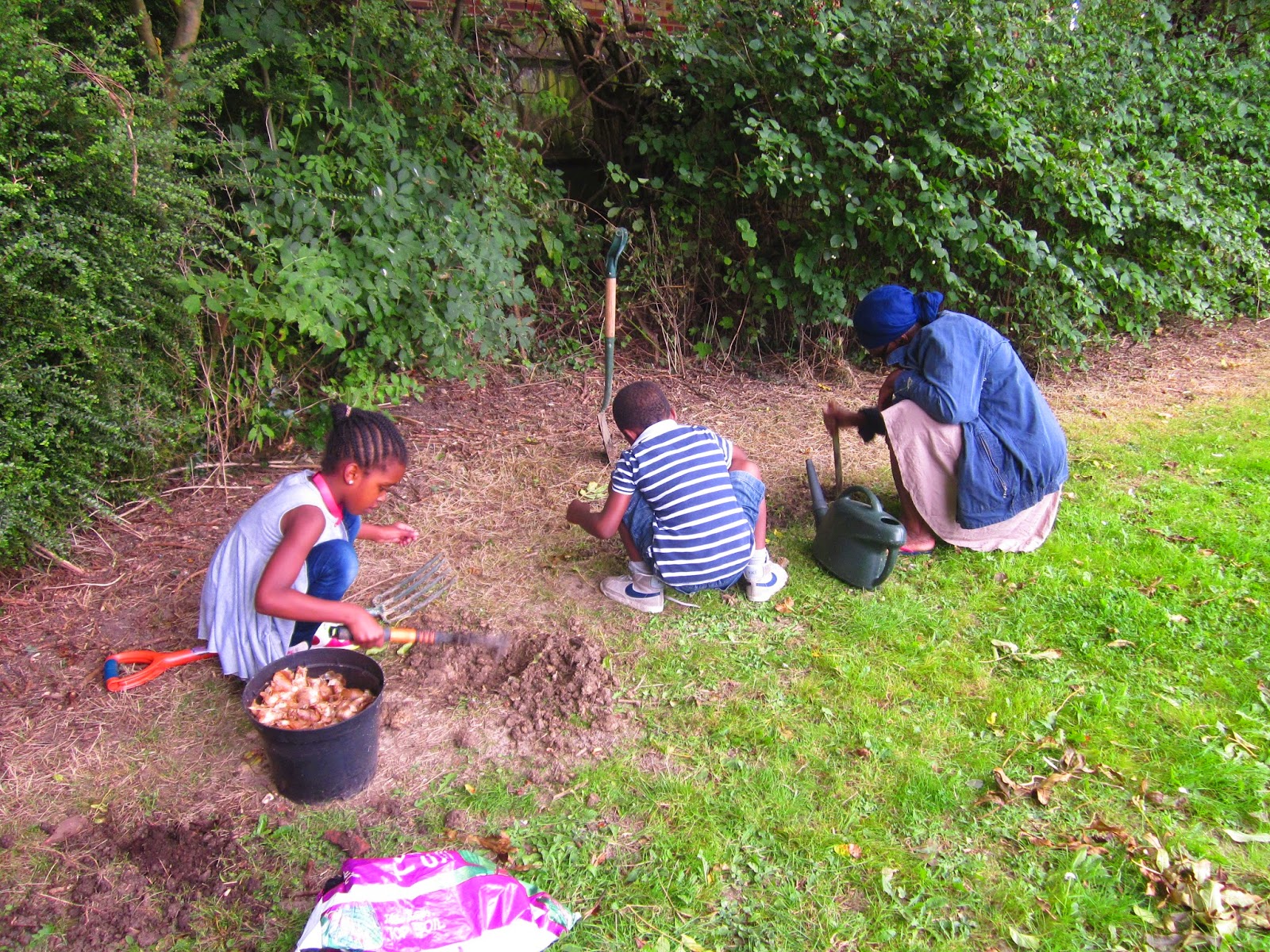 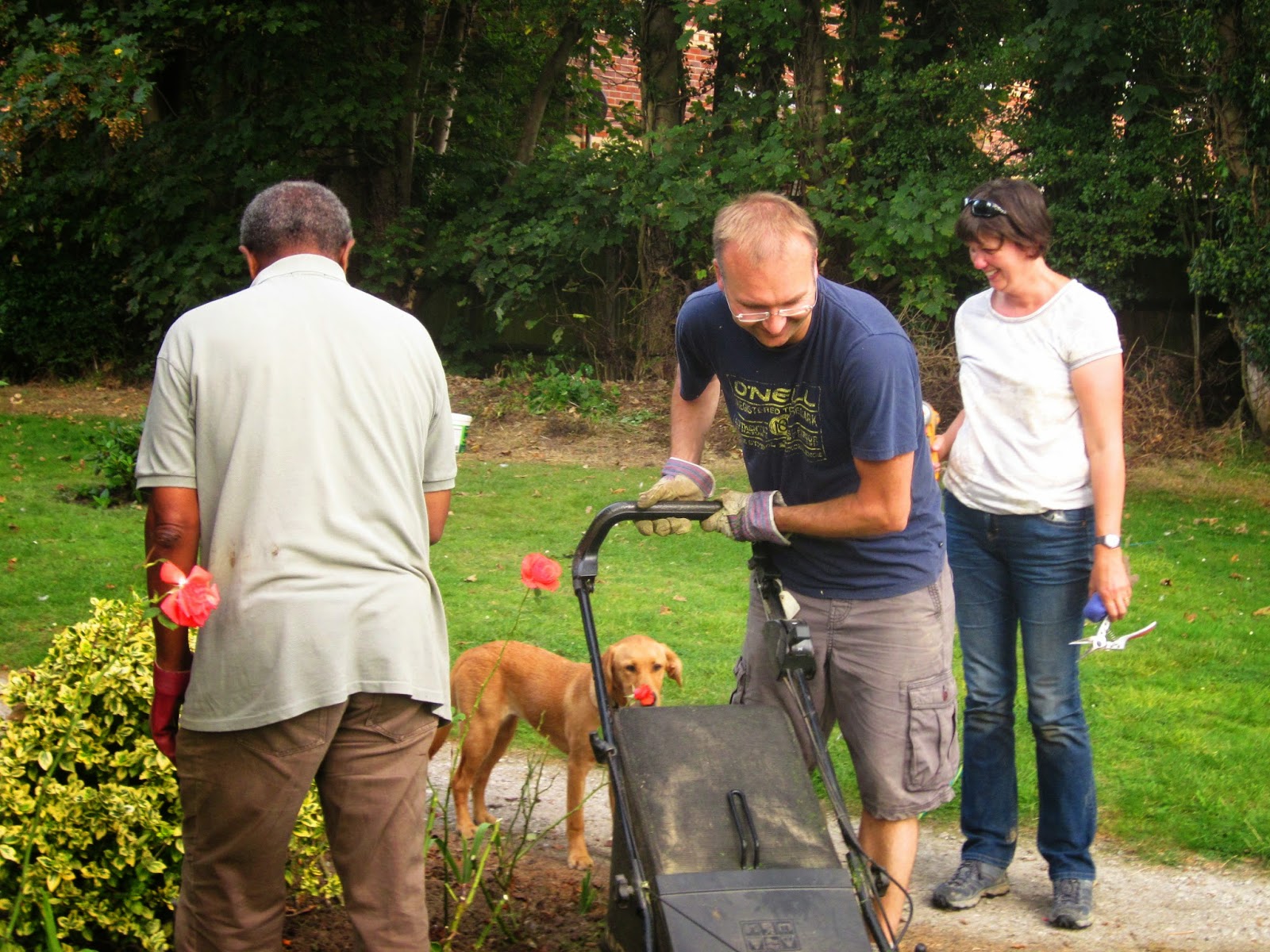 I apologise for not posting for a while, but I have been on holiday, then when I got back I have been rather busy. Anyway, here is the next installment of The Wolf Pack.

Fero woke late feeling rather ill. His head hurt and his stomach felt as though someone was stirring the contents with a spoon. He opened his eyes and immediately wished he had not as the daylight was much brighter than usual and made his head hurt more. He heard a groan from Basalt’s bed.
‘I’m dying,’ groaned the dwarf. ‘The dwarven spirits were poisoned.’
Fero realised, now that memory was returning, that the pair of them had drunk far too much the previous evening and were suffering from the mother of all hangovers.
‘No it wasn’t,’ he told the dwarf. ‘We just had too much. It’s a hangover not poisoned spirits that’s making you feel ill.’
‘Hangover?’ roared Bas, making Fero wince as his head pounded in time to Bas’s shout. ‘Insult me will you? I—NEVER—SUFFER—FROM—HANGOVERS. Bad drink will make me ill, but I never, ever get hangovers!’
With that, he collapsed back groaning, then reached for the water jug and was violently sick into it. ‘Poisoned we were,’ he muttered as much to himself as to Fero, who was not really listening as he was feeling as sorry for himself as Basalt was. ‘Poisoned. Not a hangover at all. We were poisoned!’
Eventually, the pair made their way gingerly down the stairs into the common room where they asked for a jug of water and two tankards, much to the delight and amusement of Mabrella. She could not help but tease them with offers of cooked breakfast and ale.
‘I’m never going to drink dwarven spirits again,’ declared Basalt with such vehemence that even Fero managed a smile.
‘Until the next time I suppose,’ he said to the dwarf, and got a glare for his trouble, but Basalt could not reply further as he had to rush out of the inn to be sick once again.
Eventually, they were both feeling a little better, but as it was nearly time for the lunchtime meal, they decided to eat before going out to resume their job hunting.

Basalt had had a similarly disappointing time while enquiring amongst the metalworkers as he had had with the Guard and the smiths. As with the blacksmiths, they all seemed to want someone with less experience than the dwarf, or did not want to employ anyone at all. In a large town such as Hambara, Basalt found this state of affairs strange in the least. He wandered back to the inn, musing to himself.
When he arrived, Keloriff approached him with the note that Fero had left for him and Carthinal. He thanked the man, but did not open it, as it would have been a waste of time since he had never learned to read. It was not a skill that he had required in the mines as a youngster and he had not bothered to learn since. He would wait until Carthinal returned and he would ask him to read it. He did not have to wait too long before Carthinal came in through the door. He was in a buoyant mood, as he had now received the results of three tests and had passed all of them, the second with distinction, and the third with a merit. Basalt was pleased for him and after congratulating the mage, he handed him the note.
‘It’s from Fero,’ Basalt told him. ‘I think it’s telling us he’s gone out of town. He was rather restless and feeling the need for some fresh air, I think. Can’t blame the lad. I feel a bit like that myself.’
Carthinal opened the note and read,

‘Carthinal and Bas,
I have been unable to find work in the city, and I am becoming suffocated here. I cannot breathe this air or stand the press of so many people any longer. I am going out of the city and into the woods for tonight. I will return tomorrow to try my luck again in the Hiring Hall. I will come to the inn after that and eat with you at least.
Fero.’

I'm off on holiday tomorrow. I may be able to post a few comments if the local WiFi permits, but if I am off for a couple of weeks, that's where I am.

Thought! When I learned to drive, many long years ago, I learned that when entering a roundabout it was not necessary to give a signal until the exit before the one that I was taking. This was because there is only one way to go round a roundabout! Then came mini-roundabouts and somehow they were treated as normal cross roads and people began to give a right turn if they were taking the right hand exit.

In my opinion this has led to great confusion in signalling. Many people signal right turn when they are going to take the straight on option, thus causing confusion. There is a problem with roundabouts that don't have the standard four exits too. What do you do with five or six exits. If you signal right turn for the fourth, how does anyone know you aren't taking the fifth? Another problem is for people entering the roundabout. It is not always possible to see where a vehicle has entered and so they may be taking the exit before yours, or not. What signal do you give if you are going right round and back the way you came?

Mini roundabouts are a menace too. People often completely ignore the fact that they are roundabouts. Many folk drive right over them, and one near to where I live, people actually go the wrong way round it! It has four exits, but two of them are very close together and so if people are taking the right-hand one, they simply drive down it as though the roundabout weren't there! I don't suppose they think of it as going the wrong way round, but they are.

This signalling is now actually taught to drivers, but in my opinion it causes more confusion than it clears up.