Some things you didn't know about the World of Vimar

I am posting some information about the World of Vimar where The Wolves of Vimar takes place. I hope you will find it interesting. I am also including a map of ther continent of Khalram where the action of the first 3 books takes place. 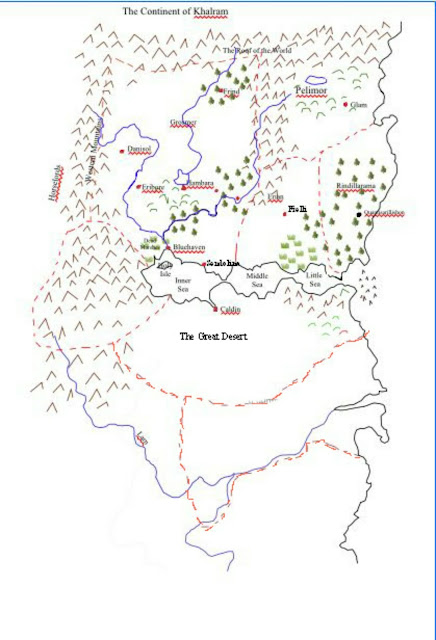 Vimar circles its sun in almost exactly 360 days. This leads the people to have divided their year into 12 months of 30 days. Since it is not exactly 360 days, but in fact 360 days and 4 hours, this means that every 6 years an extra day is added to the year. This is added at the end of the year and is called the Day of the Gods. It is a holiday for everyone and as it comes just before Grillon's Day, also a holiday when the New Year is celebrated, everyone looks forward to this time.

Because all the important astronomical timings are 6 or multiples of 6, the people of Vimar have come to believe that six is a holy number. Thus when they came to devise the timings of the day,
they decided to divide it into 24 hours, much as we do on Earth, However, they begin to count their day from the time of dawn on the 2 equinoxes, unlike Earth, where timing is taken from the mid-point of darkness at this time, more or less. Once every place began their day at dawn, regardless of time of year or place on the planet, but this became somewhat confusing as trade increased, and so the standardised time began. Thus what on Earth would be 6am, on Vimar it is 0 hour, and Earth's 12pm is Vimar's 6th hour.

Vimar has 2 moons, Lyndor and Ullin. Lyndor is slightly nearer to Vimar than Ullin and appears to
be a gold colour. Ullin appears more silvery. It is considered propitious when the moons are both
full together, and if both moons are dark, that is considered to be the least lucky time for any
ventures. The best times for starting any venture is when both moons are waxing, and conversely,
if they are both waning, that is a bad time, although endings are good at this time.

The world has 2 large continents, The one featured in the Wolf Pack is the continent of Khalram.
Grosmer is the largest country on this landmass and has a climate ranging from Mediterranean in
the south to cool temperate in the north. To the west, beyond the Western Mountains is a vast
plain on which live the nomadic people known as the Horselords for their mastery of the beautiful
horses they rear. It is said that a huge ocean lies beyond this plain, but no one knows for sure.
Beyond the Mountains of Doom in the east are the lands of Pelimar, a loose coalition of city states,
Erian, ruled by an elected Master and the elven land of Rindissillaron. The lands to the south are
largely unknown to the people of Grosmer, Pelimar and Erian, although trade does occur occasionally. The Great Desert is largely to blame for this lack of contact.

There is a large, mysterious continent to the far east also that occasionally comes to the attention of the people of Khalram because of the Raiders who come for plunder and slaves.

Once, the elves and humans  all lived together in Khalram, but soon they began to fall out and so
the elven land of Rindissillaron was founded in the east of the continent. Here the elves could live in
the way they wished, close to nature and disturbing the natural world as little as possible. The
dwarves have always lived in the mountains where they can dig for the ores and gems they are so
good at working.

The other races, such as orcs and trolls, were banished to the far north, as far as the mountain range
known as the Roof of the World and even beyond, it is thought, although no one has ever managed
to cross this range and return.

How well can you spell? Go back to school and take our spelling test to find out - BT

How well can you spell? Go back to school and take our spelling test to find out - BT

I got one wrong! Dreadful for someone who likes to call herself an author.
Posted by V.M.Sang at 08:15 No comments:


I am posting this on here and also on my Wordpress site, as yet incomplete. If you want to make a comment, please visit http://aspholessaria.wordpress.com/ since I can't receive comments here.

There are a number of words that are frequently confused by people. In this post I hope to clarify nine of these pairs.

Brought is the past tense of ‘to bring’ and means to fetch something.

e.g. The dog brought the ball back to me.

Bought is the past tense of  ‘to buy’ and means to purchase something.

e.g. When I went to town I bought a new blouse.

The mistake is always using brought for bought and never the other way round.

This is a very common one. So many people will talk about ‘There were less people at the match than last week.’

It should be ‘There were fewer people at the match than last week.’

Less is used for things that you measure (like weight, temperature, volume,etc)

Fewer is used for things you count (like people, goals, items in a basket at the checkout, etc)

A simple rule of thumb can be: If it only comes in whole numbers, then it’s fewer, but if it can be in fractions, then it’s less.

Literally means that it actually happened.

e.g. It was literally snowing a blizzard.

In this case, there would be no visibility to speak of and snow falling as if it were in the Arctic or Antarctic with a strong wind blowing it almost horizontal.

Virtually means it is not actually that thing. It is used when a metaphor is used.

e.g. The footballer was virtually flying down the wing.

If the speaker or writer said ‘The footballer was literally flying down the wing’, that would mean that he had somehow sprouted wings!

I recently heard a broadcaster on the radio use infer when she meant imply. These people ought to know better. Most, I assume, are journalists, or at least have a ‘good’ education with a degree. They should know the difference, and if they don’t, in my opinion, should not be in the job.


Imply is what someone says when they want to suggest something without actually saying it in so many words.

e.g.‘He implied that he was going to come with us.’

Infer means that someone has drawn a conclusion from a statement.

e.g. ‘From what he said, I inferred that he was going to come with us.’

This is one for the written word.

Lose is when you misplace something.

e.g. You are going to lose your purse if you don’t put it away.

Loose is when something comes undone.

e.g. My shoelace has come loose.

A Tragedy is something very sad.

e.g. It is a tragedy that he died so young.

A Travesty is to make something ridiculous.

e.g. The dogs runnign onto the pitch made the football match a travesty.

Effect is a noun. It is the result of something.

e,g, What is the effect of mixing red and yellow together?

Affect is a verb. It says what something does.

e.g. How did the accident affect you?

This is one I heard from young people when I was teaching.

Popular means well liked by a lot of people.

e.g. Dean was always full of fun and so was very popular with his team mates.

Common means that there are a lot of them.

In this last incident, many pupils would say that the herring gulls were very popular, but if you asked the car owners of Brighton, I think you would get a very different view.

Defective means that a thing is broken in some way.

e.g. I sent my new vacuum cleaner back because it was defective. It was failing to pick up the dirt.

Deficient means that there is something missing.

e.g. The new wardrobe I bought was deficient. There were not enough screws to put it together.