I've just read a disturbing post from soulfultroubadourdotcom. It deals with the case of two boys who were badly beaten for wanting to leave the church. So badly beaten, in fact, that one of them died. I think most people would consider this a dreadful crime. Unfortunately, the people whod did this must have felt they were fully justified.

This is what's scary. These people thought, and I suppose continue to think, they were fully justified in what they did. This did not happen in Syria, or Iraq, or Libya or any of those countries that we think of as being barbaric, but in the USA. These people were not extremist Muslims, but Fundamental Christians.

By what right they think they have to call themselves Christian I really do not know. Nothing they did is what I understand to be following the teachings of Christ. These extremist 'Christians' are just as bad as the extremist 'Muslims', and yet we in the west seem to ignore them.

OK, they don't go round bombing people (yet), thinking you can force people into believing as you do, but are they really much better? Beating young men because they don't like the message you are preaching is just as bad in my eyes.

Extremism is dangerous, whether it's religious or political, whether Muslim of Christian, Right or Left. People ignore these folk because they call themselves Christian, and that is the religion of the west. Of us, even if we are non-believers.

So we tar all Muslims with the same brush. They are all wicked people who chop of the heads of non-Muslims, but we ignore those Christians who think to force people to their religion by other acts of brutality.

I have written a poem about hypocrisy. I'll post it later next month, possibly.

If you would like more details, go to https://soulfultroubadourdotcom.wordpress.com/2016/10/
Posted by V.M.Sang at 00:00 No comments:

There are some questions that require thinking about.

Does God Exist?
Why are we here?
Are we alone in the universe?

Why do young people think it's cool to walk around in torn jeans? It makes them look scruffy and as though they don't care about their appearance.

Why do people find the use of the apostrophe so hard? Is it because they've been taught poorly? It didn't used to be the case that we found apostrophes lurking before every 's'.

Why do some people think it's acceptable to drop litter? Don't they have any pride in their town/village/country? Do they drop their litter in the living-room at home?

Why can't people choose to use inclusive language? There is no need to use the word 'man.' (Its capital letter to denote it was being used as the collective has disappeared.) There are plenty alternatives that do not invoke gender. For 'man-made', 'artificial' or 'synthetic' can be used. For the generic, 'Man' we can use 'human', 'humanity' or 'people.'


When people pick up their doggy poo and put it in a bag, why do some of them then hang the bag on the nearest bush? Do they think it looks pretty?

Why do people wear dark colours at night? If they wanted to hide in the dark, that's what they'd wear, so don't they realize drivers of cars can't see them? Even with street lights there are shadows that makes it hard to see them.

On the subject of dark clothes, why are clothes always dark in the winter? Surely this is the time we need cheering up with bright colours?
Posted by V.M.Sang at 00:00 No comments:

First, may I apologise for not posting earlier, but I only came back from hoiday at 10pm on Sunday night. I thought I'd have time to write it on Monday morning before going to look after my grandchildren, but I failed to allow for the fact that I would have a lot to do after the holiday. So I'm afraid it's a little late, albeit only a few hours.

I've just entered the following poem into a Halloween Poetry Competition and thought you might like to have a look at it. 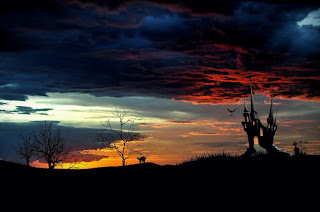 The moon has hidden her face tonight
Turned away from the Earth.
The clouds are scurrying away in fright
From what the night may give birth,
For tonight the veil is thin.

The wind is blowing the leaves around.
They hide in crannies and nooks.
Cowering, shivering, hope not to be found
By phantoms, ghosts and spooks,
For tonight the veil may tear.

Build a bonfire, create some light.
The spirits are afraid.
They like the shadows, shun what's bright
And lurk within the shade
For tonight they cross the veil.

Ghouls and spectres, wraiths and shades
Return to Earth tonight.
We're filled with dread as daylight fades.
The smallest sound will give us fright
For tonight the veil has gone.

I hope you enjoyed this poem. I have trouble reading comments on this site, but feel free to make them. I'll get back to you if I can.
Posted by V.M.Sang at 10:08 No comments:


Asphodel spent the next few days in confusion. Her mother reprimanded her several times for forgetting little things.

'Really, Aspholessaria,' she said, 'Anyone would think you were in love. What's wrong with you?'

Her mother turned to her husband.

'She's of House Royal. She can't be allowed to fall in love.'

Asphodel thought, 'Am I in love?'

She wandered out into the city. She had an errand to do for her mother anyway, but she found her steps taking her towards where Linn lived. As she passed his house, the two young men came out.

'Asphodel,' called Vass. 'I'm so glad we've seen you. Are you and Sissi going to Allimissoro's tonight? Liss and I are, and I'd very much like it if you were there too.'

'I don't know,' replied the girl. 'I've not seen Sissi for a couple of days. I'll go and ask her later, when I've done the jobs mother wants me to do.'

Later, Sissi agreed to go to Allimissoro's that evening to meet the two young men. Asphodel was still in confusion. Vass had said he would like it if they were there, but did he mean her, Sissi or both of them?

Later that evening, it became apparent that Vass's interest was in Asphodel. He danced with her all evening and hardly took his eyes from her when he was not dancing. That evening he walked her home without the accompaniment of Sissi and Liss, who walked home separately.

Half-way to Asphodel's home, their hands touched. Asphodel's stomach turned over again as Vass took her hand in his. They walked along in silence, each happy in the other's company. The world around them had vanished. There was only Vass in the world as far as Asphodel was concerned.

All too soon the walk ended and they stood outside Asphodel's home. Vass put a fnger under Asphodel's chin and lifted her face, then he bent his head to kiss her. When his lips met hers she thought she would faint with pleasure.

The kiss seemed to go on for ever, but finished all too soon as far as Asphodel was concerned. She leaned against Vass's chest and he held her close.

'You're the most beautiful girl I've ever met,' he told her. 'I wish we could stay like this for always.'
Asphodel sighed and her practical side came to the fore.

Vass bent his head once more and delivered a passionate kiss on Asphodel's mouth, then stood and watched as she walked up the ramp leading to her home in the trees.

Asphodel and Sissi's visits to Allimissoro's became more frequent over the next few months. She did not deliberately keep her relationship with Vass secret from her parents, but she just never bothered to tell them. It didn't seem important they should know.

She was engrossed in her growing relationship with Vass. That was all that seemed important to the girl. He was kind and attentive and always complemented her on how she looked. Soon the pair took to meeting other than at Allimissoro's and took frequent walks in the land outside the city. If her mother thought anything, she assumed her daughter was out with Sissi somewhere.

One day, after Asphodel and Varr had been seeing one another for almost a year, Asphodel's father called her into his study.

'I have something to tell you,' he said. 'You remember Frishillondor? He came here not long ago, to eat with us as I had business with him and wanted to help it along. Well, it seems he was quite taken with you and he's asked me for your hand in marriage.'

'Yes, it's quite a surprise, isn't it? And quite an honour too. Your mother is thrilled. He's nearer in blood to the Elflord than even we are. His sister is the Elflord's mother. Fancy that! So of course I agreed immediately.'

'Now, now, child,' her father replied gently. 'He's not so old. He's younger than me. Anyway, I insist on this marriage. It'll be a big boost to our family. All our businesses will benefit greatly with him as a sponsor.'

'I said I won't marry him, and I meant it,' she said as she ran out of the room, slamming the door behind her.


Will Asphodel have to marry Frishillondor? What will happen to her love for Vass? Look out for the next part on the first Tuesday of November.