I should have published this at the end of the season, but didn't or some reason. Can't remember what. It wasn't a good season for us though, so I was probably depressed!

We missed Robin van Persie
For quite a length of time,
’Cos in the bright red jersey
In front of goal he’ll shine.

Vidic is our captain.
A great defender, he.
Attackers strive in vain
To pass him and get free.

And Rio is the other one,
A partnership so great.
As centre back he always shone
We’ll miss him and his mate.

And now we see Valencia
Charging down the wing.
All opposition, they do fear
Versatility he does bring.

Rooney runs all over.
He loves to play the ball.
All the field he’ll cover.
His skills do us enthral.

Our new boy is Juan Mata.
He runs in from mid-field.
The centre backs just shatter.
He shoots and they do yield.

Hernades is our Little Pea.
Yes, he will shoot on sight.
I think everyone will agree
His goals are a delight.

Our left back comes from France.
Patrice Evra is his name.
Down the left wing he does dance.
We’re all so glad he came.

Our stalwart man in mid-field,
Carrick holds the fort.
The ball he never does yield.
He never sells us short.
They cannot get past Smalling.
He stops them in their tracks.
He’ll give them all a mauling
’Cos he is never lax.

Now Fergie has retired.
We’re sad he had to go.
But Moysie has been fired
Because we end so low.

But come on girls and boys.
We are not down and out.
Let’s make a lot of noise
And with me, join  the shout

Poetry: We Will Remember Them

I did decide to put my poetry on separate pages, but I can't seem to find my poetry page at the moment.
Also, I intended to publish this poem on the anniversary of the start of WW1, but that is Monday and I won't be near my computer then, so here it is now.


WE WILL REMEMBER THEM.

I’ll never truly understand
How World War I began.
The death of Archduke Ferdinand
Started the deaths of many more
The young, the old, the rich, the poor.
All died with guns in hand.

My Grandad went with Uncle Jim
And Our Poor Willie, too.
They sent them off, singing a hymn.
Grandad went to Gallipoli,
Uncle Jim left his love, Polly.
Gas in trenches did kill him.

I cannot see, in my mind’s eye
Grandad with gun in hand.
A peaceful man, sent out to die.
He fought for us, for you and me
So we can live and so that we
Safely in our beds may lie.

Grandad came home, and Willie too,
But millions more did not.
Their duty they all had to do.
They died in fear, in noise, in blood.
Everything was caked in mud.
Yet in those fields the poppies grew.

The War to end all wars, they said,
So terrible were the deaths.
The youth of Europe all lay dead.
Yet 21 short years to come
Another war. Once more a gun
In yougn men’s hands brought death.

One hundred years have passed since then.
What have we learned? Not much!
Too many nen are killing men.
Wars still abound around the world.
Bombs and missiles still are hurled
At those who disagree with them.

July 2014
My Grandad was indeed a very peaceful and gentle man. He was wounded in Gallipoli and sent home. He convalesced in Deganway, North Wales. Great Uncle Jim did not die in the trences, but he was gassed and sent home, but never recovered. I never knew him. He was engaged to a girl from Manchester, Polly, but he died before they married. She was always accepted by my family as if they had been married and was known as Auntie Polly. My aunt had her engagement ring.
'Our poor Willie' was my grandmother's brother. No one ever knew why she called him 'our poor Willie'.
I am attaching photos of my grandad and 'our poor Willie' to this blog. I don't have one of my Grandad from the war, so this is on his wedding day. Willie's photo is from the war. 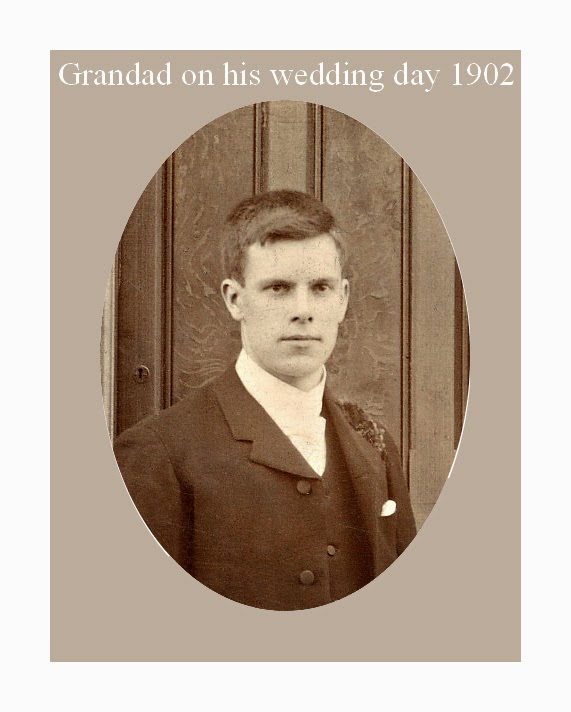 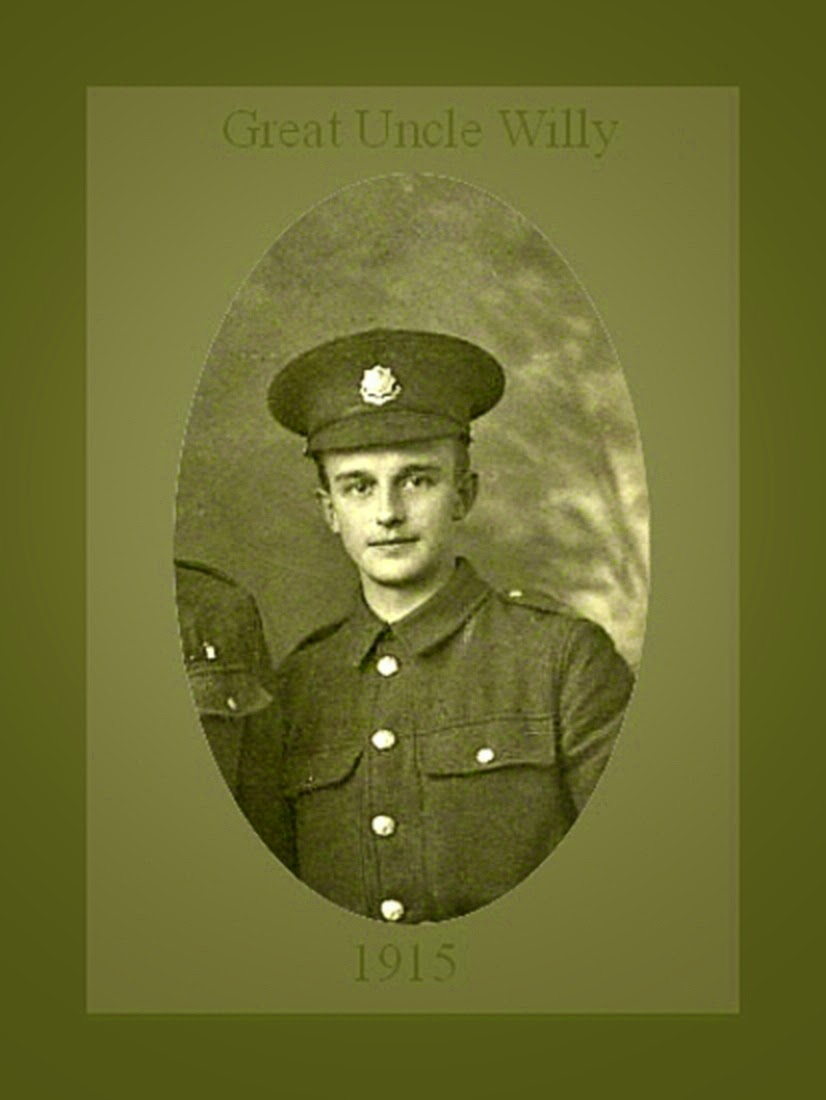 I am publishing another poem today. I will try to publish more often, but life seems to get in the way!

We like our village churches
But we don’t go there.
We love our local pub
But we don’t drink there.
We don’t want them to close
Though no one ever goes.

Our roads, they are congested
With cars for everyone.
The others shouldn’t have them
But we, of course, need one.
It should be other folk
Who give it up and walk.

Aircraft fly above us
Polluting all the air.
We think there should be fewer
But we still fly o’er there.
We need our holiday
No matter come what may


We don’t like highest earners
But want to earn as much.
We eat our meals with wine
But we don’t know too much.
We really like to think
We understand our drink.

We highly praise the classics,
But we don’t read them.
We talk of works of Art
But never see them.
We think we are so highbrow
But brows are really quite low.
We say we all hate rumour
But spread the gossip.
We say we understand things
When we don’t, not one bit.
Hypocrites are we
And we always will be.

What a weekend of sport! Went up to stay with my brother-in-law near Cambridge to watch Le Tour. I have been to see it several times in France, but there were LOADS of people watching in England. Far more in the countryside then even in France. Every road seemed to be lined with people with few gaps. In France there are gaps between people in the countryside.
Anyway, we were there in good time to see the caravan as well as the cyclists. That is all part of the fun. I think that many folk don't know about this as people were turning up long after it had passed. The caravan is the advertising part, of course, but they throw out freebies and part of the fun is racing and scrambling for them. We got 4 things--a keyring, a little packet of Tessier sirop (a bit like squash) a bag, PE kit or shoe bag type, and a wristband advertising Sheffield Hallam University.
The peloton seemed to take quite a while to pass and I got some photos.
It was quite hot standing there in the sunshine, but it was a glorious day, fortunately, so we didn't get wet.
Then there was the British Grand Prix on Sunday, won by a British driver, and the mauling of Brazil last night. (Pity it was by the Germans though.)
Only 2 weeks to go now to the Commonwealth games, and the Test Match has just started today against India. Good for sports fans, but maybe not so good for those who aren't so keen. 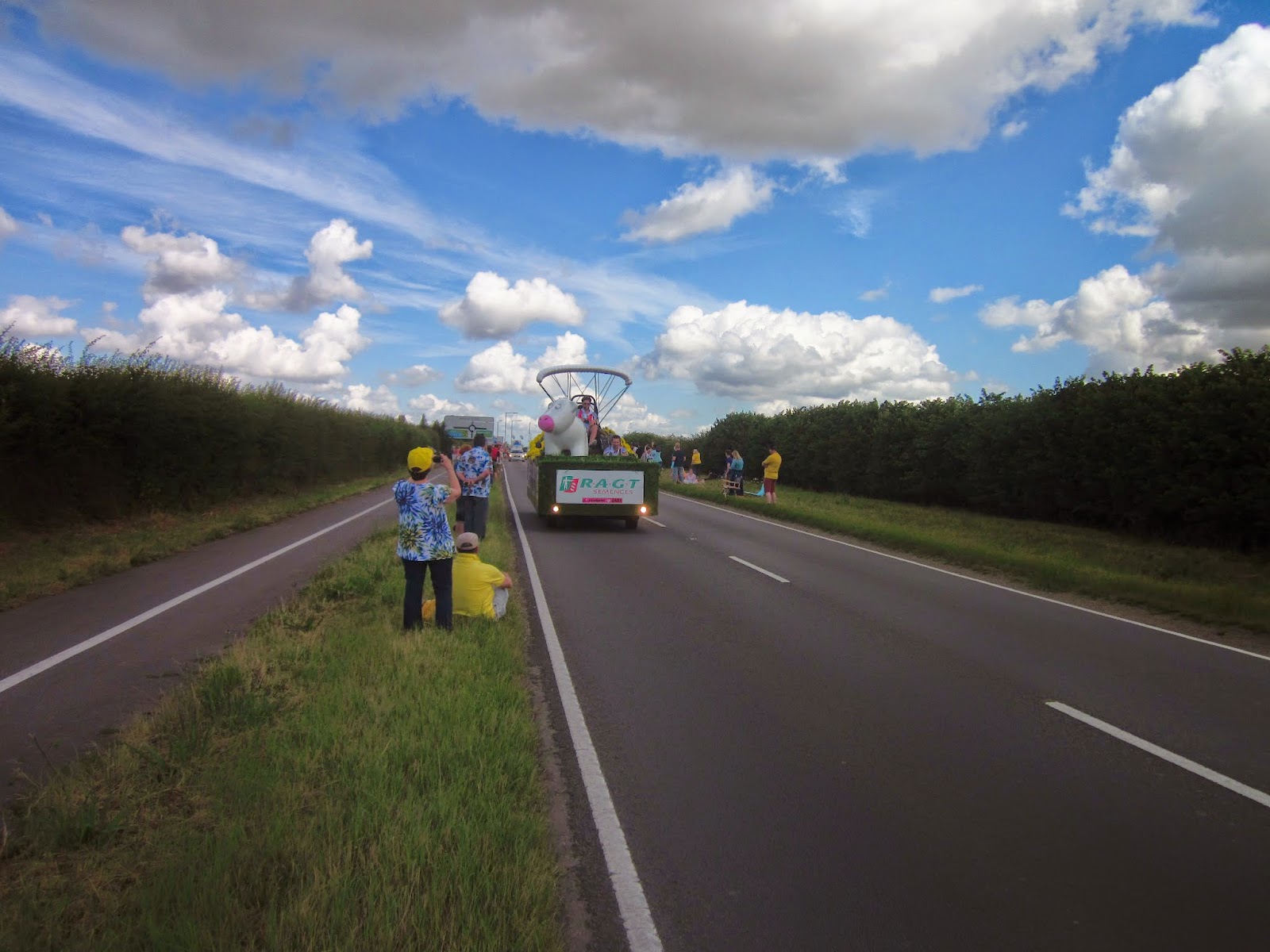 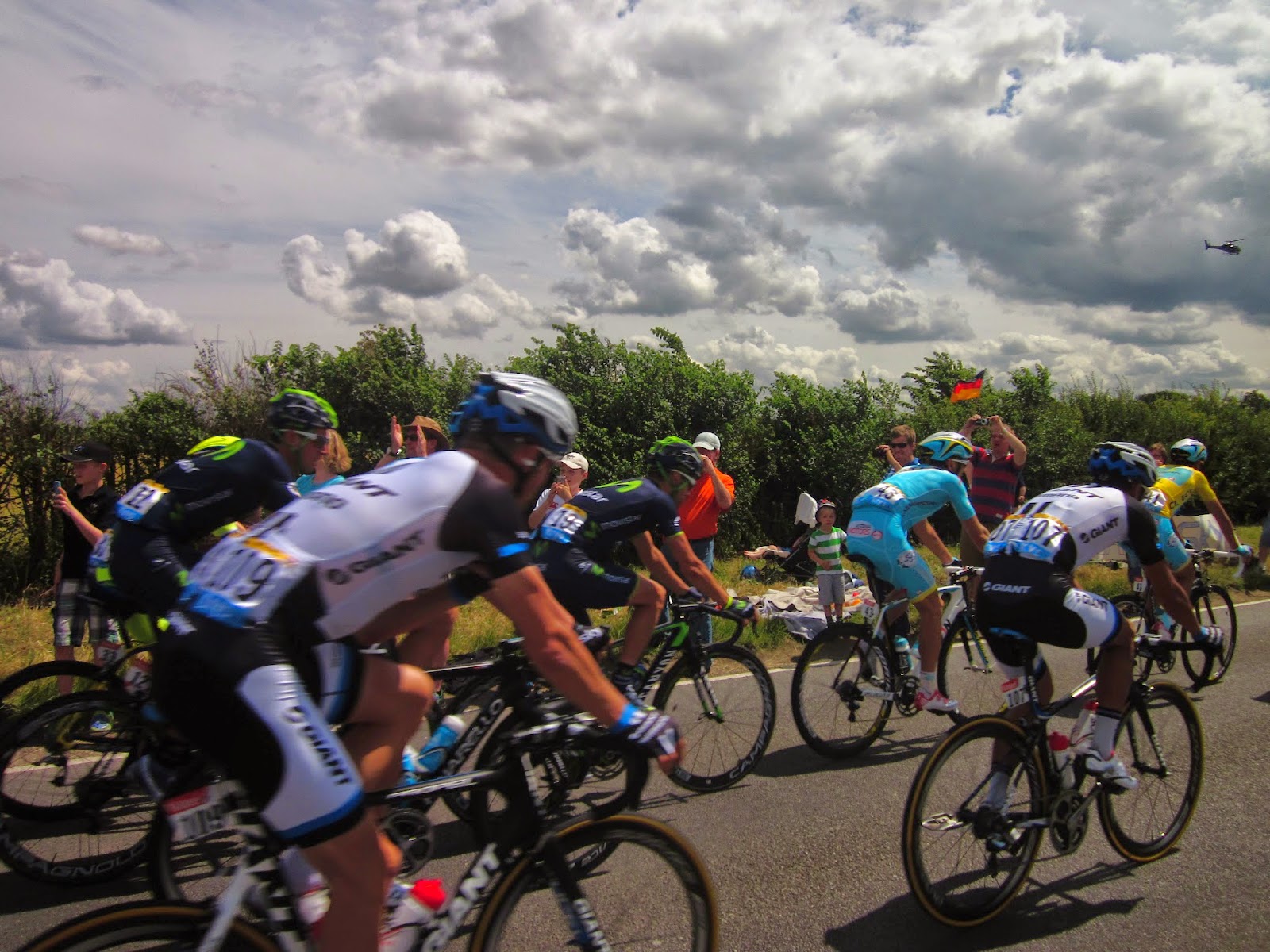 Here is the promised Chapter 9!

Here is another poem. Another extract from The Wolf Pack will be available to view tomorrow or Thursday.

I saw beauty when I first saw you,
My little girl, so small, so new.
Little toes and fingers small
All wrapped up within your shawl.

At first you crawled, and then you walked.
It wasn’t long before you talked.
The funny little things you said
Are all stored here, within my head.

Your big brown eyes, your curly hair—
I feel such love, you are so rare.
Never was another born
Not at evening, nor at dawn.

My little girl, you are unique
So small, dependant and so weak.
But not for long, my little one:
The years fly by and then you’re gone.

Now you have your own children
The miracle starts once again.
The love I feel for you is passed
By you, to yours, it is so vast.

The love of Mother for her Child
Is never one that’s meek and mild.
It lasts forever and a day.
It never dies, come what may.