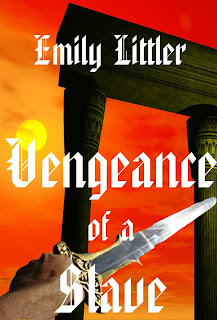 The ebook version of my historical novel, written under the pen name of Emily Littler, is now on sale. You can get it by clicking this link. It will take you to your own country's Amazon store.

It tells the story of Adelbhert, a young boy who is forced to watch the crucifixion of his father and other men from his village who are being punished for mounting an attack on a Roman city. He and his little sister are taken and sold as slaves.

Their purchaser takes them to Brittannia, where he is treated as a pet--which he hates. He stores all the things the Romans have done to him in his memory and refreshes it every night with a litany of hate.

He has promised his sister that they will escape the Romans and return to their homeland in Germania, but this proves impossible. All the while, his hatred and desire for vengeance is growing.

When he gets the opportunity to escape, he finds the means to attack the Romans.

But how can one young man defeat the power of the Roman Army, and can he overcome his hatred. which is eating away at his soul.
Posted by V.M.Sang at 08:04 No comments:

David Kummar is the author of a number of books, including the War of Enden series, which I have read and thoroughly enjoyed.
Welcome to my blog, David. I believe you have a new book out, called My Abigail. Please tell us something about it.

“She would always be my Abigail.”
It was always about Abigail, for me. The book is called My Abigail, the major plot twist has to do
with Abigail, and the character I was reduced to tears over was Abigail. Trust me, I cried
countless times writing this book.
So, why is the main character named Caleb? Let me explain this book.
Caleb is a teenager, who lives in a small rivertown. He isn’t the cool type of teenager. He’s
lonely, angry, moody, unhappy, and doesn’t really have any friends. Not one. So when he meets
Abigail, who is as kind as she is beautiful, the two mesh pretty well. After all, what choice did
Caleb have, unless he wanted his high schools years to -as the kids say- suck?
Around the same time, he meets Xavier, a nerd who he’s heard all about but never met. They
become friends as well. Then there’s Ayva, the little girl his mom babysits. She’s creepy… really
creepy… but nice enough. They get along, and for Caleb it’s like having the responsibility of
being a big brother.
Things turn dark, as things tend to do. Abigail has her secrets. Xavier isn’t who he says. Ayva
continues to act stranger and stranger. And Damian, the shadowy figure on the street who
haunts Caleb’s nights, threatens to reveal everything.
Never before has the saying “ignorance is bliss” been more true. Because when Caleb finds out
exactly what’s going on with Abigail, he wishes he never had. He wishes he had never met the
perfect girl turned monster.
What’s that secret? I can’t tell you that. I can assure you, however, that it’s something you’ve
not seen before and you won’t expect coming. Don’t take my word for it. The reviews on
Amazon say the same thing.
I could talk about lots of things in regard to this book, and I might in the future. I could talk about
the music I listened to, or the time it took me to write it, or the usual day and how typing fit into
my schedule. But I can talk about those later. What I want to let you know is what my purpose
was for this book, and how it became the most important book of mine.
First of all, I wanted to win an award and become a millionaire. Nah, I’m just kidding. That wasn’t
even on the plan, and probably never will be.
For me, this book wasn’t really about making money (haven’t done that) or shocking people out
of their socks (hopefully did that). It was about writing something worth reading, and something
unique.
This book is scary, sure. It’s definitely emotional, what most would call sad. But overall, my hope
is that it’s original. Because just like the title character, this book has its secrets. It has its dark
moments. It had its happy ones. And in the end, it has Abigail.
Thank you David. It certainly sounds a fascinating book.
Posted by V.M.Sang at 00:00 No comments: 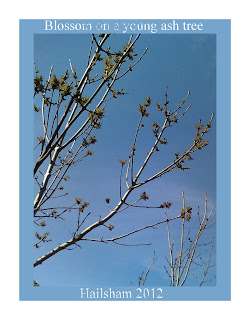 Dandelions, like gold, cover the meadows.
Newborn lambs frolic in fields.
New leaves on the trees are casting their shadows
And winter’s cold grip quickly yields.

At the edges of woodland the primroses glow
And cowslips their scent fills the air.
Anemones dance when the breezes do blow
And birds sing with never a care.

Then bluebells and campions come into bloom
Their colour the blue of the sea.
The cuckoo, that herald of spring, will come soon
His call echoing over the lea.

The song of the blackbird is like molten gold.
His notes are so pure and so clear.
Hearing him seems to banish the cold
And brings joy to all those who hear.

Robin is nesting, and other birds too,
The hedgehog is active once more.
The young of the deer and the badger and shrew
Play their games as in old days of yore.

The sun climbs higher and higher each day
Giving more of his heat and his light.
It sparkles like stars fallen into the bay.
All smile at the beautiful sight.

Hope and excitement come with each spring morn.
What blessings will come with this day?
New starts can begin once again with each dawn
And send us all hopeful away.


I hope you enjoyed this poem as much as I enjoyed writing it.
Posted by V.M.Sang at 00:00 No comments: 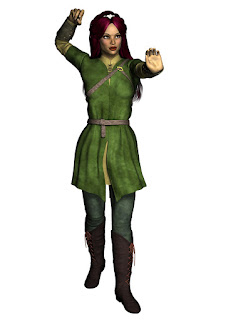 To find out more about Asphodel's later adventures, read The Wolves of Vimar Series.