Last Saturday we went to the Hailsham Bonfire Torchlight procession. Yes. I know that it's still about 2 weeks until November 5th, but  the town bonfires in Sussex are staggered. This is because they all have processions and go to each others. this means, of course, that they have to be on different nights, the most famous one being that at Lewes. Actually, they go on from September!
It appears that after the failure of the Gunpowder Plot, an Act was passed in Parliament making it law that people celebrate this day. The  celebrations were to include a church service to thank God for rescuing the ountry from the Papist plot.
This Act was repealed in, I think, the 19th century and the celebration of Bonfire night dropped off, except in Sussex where it continued. I suspect, but do not know for sure, that these probably involved a torchlight procession.
We went with some friends and watched. It was a mild night after much rain in the morning. The torchbearers were all in costume. some were in period costume, and I was pleased to see that the 'Archbishop of Canterbury' was present, and also that 'Queen Victoria' had deigned to come from her grave to attend. There were also smugglers and one group, with a nod to Hallowe'en, were dressed as zombies and skeletons.
Bangers were let off at intervals, making the watching public jump.
After the procession had finished, and a short service and laying of a wreath held at the War Memorial (it's quite close to poppy day after all,) the procession and many of the people went to the lighting of the bonfire, the detonation of the effigy and the fireworks. We,however, decided to go for a swift pint in the local pub, whose doors we were conveniently standing next to!
Am I being curmudgenly? When we went into the pub it was fairly quiet and we found a nice table in the corner. Then people started to come in with their children! Soon the pub had at least as many little kids running around as adults. I feel that there should be some places where adults can go without having little kids running around, (and they were running around, chasing each other and hiding from each other) and the pub should be one of them. When I was growing up, children were not allowed through the pub doors; then they were allowed in if they were eating. Now it seems they are allowed in with the only stipulation being that they are not at the bar.
Here are some photos of the torchlight procession . 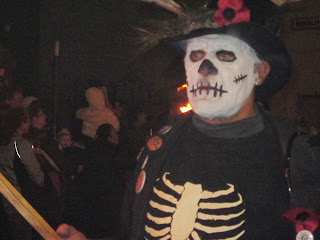 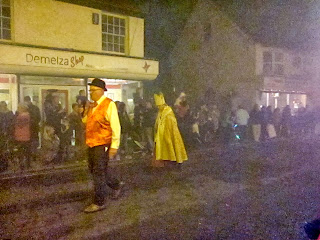 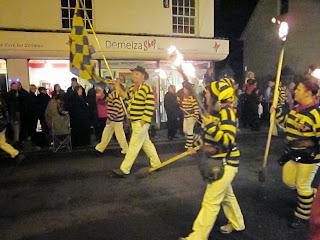 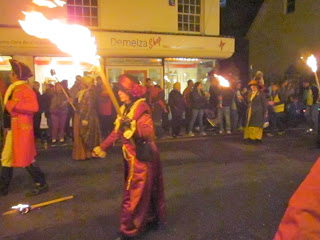 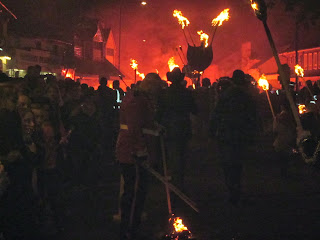 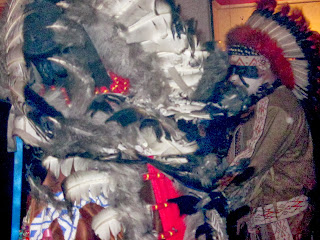 Here is the promised next extract from The Wolf Pack.

Here is a story that you may have heard, or may not, depending on your age. It was originally written by Hans Christian Anderson, I believe.

There was once an emperor who lived at a time when magic still existed in the world. One day two brothers appeared in his court claiming to have manufactured a cloth that could only be seen by wise people. Foolish folk would see nothing.
'Ah!' thought the emperor, 'I will now be able to know which of my ministers is wise, and which foolish. I can then get rid of the foolish and surround myself with wise men.'
So the emperor told the men to bring a bolt of the cloth for him to see. The two brothers left, and when they returned they appeared to be struggling with something between them, but the emperor could see nothing. However, all the courtiers appeared to see a bolt of cloth, if their comments were anything to go by.
'Oh dear,' thought the emperor, 'I must be a foolish man. I mustn't let the court know I can't see it.' So he spoke aloud exclaiming, 'What beautiful colours. I have never seen such colours in a cloth before.'
All the court murmured their agreement.
The emperor asked the brothers to make him a suit of clothes with the cloth and so the brothers were given a room in the palace in which to work. Every time someone entered the room, the brothers were hard at work, cutting and sewing.
Eventually the two men said the suit was finished and the emperor went for a final fitting. Everyone exclaimed how the new clothes suited the emperor and how the colours of the jacket and trousers complemented each other and the emperor's colouring.
'I will wear it at the parade tomorrow,' exclaimed the emperor, secretly thinking that he would get an idea as to how wise or foolish his subjects were as well as his ministers and courtiers.
So the next day, he donned the clothes and set off in the parade. All the people exclaimed how good he looked in his new clothes as he strode along before his soldiers and ministers, until suddenly, a child's voice came from out of the crowd.
'But the emperor hasn't got any clothes on!'
His mother and father tried to hush the little boy, not wanting people to think their son was foolish, but a murmur began in the crowd. It grew louder and louder until the whole crowd was laughing and pointing, saying,
'The emperor has nothing on!'
Soon the courtiers and the soldiers joined in and the emperor realised that the cloth did indeed show who was foolish--it was him.

Now why have I told this story?

I am a lifelong Manchester United supporter, and I think this story is rather pertinent to what has been happening at the club recently. This is not only in the new 'Moyes era', but started, I hesitate to say, in the era of the great Sir Alex Ferguson.
There are some players who are boosted up beyond all recognition. I am speaking of Tom Cleverley and David de Gea in particular, but I will come to others in a moment. Tom Cleverley is not good enough for Man U. He is not creative in any way, shape or form. Most of his passes are backwards: he passes back to the person he's just received the ball from too often when that person can't do anything with it: he frequently backs out of challenges: he rarely runs at people when he has the ball: he backs away from people with the ball: he often passes the ball to someone who has 2 or 3 opposition around him: he also gives the ball away too frequently.
David de Gea: People say 'He has potential: He's only young: He's improved:' OK, but Man U is arguably the biggest club in the world. We shouldn't have a journeyman goalkeeper who is still learning! De Gea punches too much, often straight to the opposition who then go on to score: he saves with his feet not his hands: he opens his legs when saving and the ball goes through: he isn't tall enough. There have been times when if he had been a few inches taller he would have saved a shot. OK, he can't help that.
Now everyone is on about Janasej. He's had 1 game when he started for Man U. Most of the game he was just about OK, but not exceptional, but then he scored 2 good goals and he's the best thing since sliced bread. On 1 match! We have other young players who are better, but are not given a chance or are out on loan, scoring for other clubs.
We have 2 excellent midfield players in Anderson and Kagawa, both creative. When we were playing West Brom the other week, Man U were running the game with those 2 in midfield in the first half, but it all went to pot when they were substituted.
It seems to me that no one dare say that these players, (de Gea, Cleverley, Janasej) are just not good enough. Someone somewhere has said that they are brilliant and, like the courtiers and the emperor, no one wants to be the person to say 'The emperor has nothing on' in case they appear foolish. A pity one of them seems to be our manager!
It isn't only Man U that suffers from this. Other teams have their Cleverley too. Is Wilshire really as good as Pele?

I am trying to get another extract from The Wolf Pack onto this blog, but am having problems. I hope to get it on ASAP.

Yesterday I opened a can of Campbell's Mushroom Soup for lunch. It was DISGUSTING! It tasted of dishwater and felt slimy. In fact, it slid off a knife my husband dipped into it leaving a tail, rahter than jjust dropping off.
On further examination of the can, it transpires that the thickening agents are gums--not surprising that it is slimy then. The biggest shock, though, was the amount of mushroom in it. Less than 2%. So how can they get away with calling it mushroom soup?

I usually make my own soups, and mushroom is very easy. Simply take some large open-cap mushrooms and some onion and cut them both up into small pieces. Fry them gently in butter for a few minutes and then add some stock (chicken or vegetable works well) and some milk and bring to the boil. Cook until the mushrooms are tender and then put in a blender and blend until smooth. Add salt and pepper to taste and a little (or a lot) of cream. Much nicer than any canned or packet stuff and quick to prepare.
Posted by V.M.Sang at 08:07 No comments: