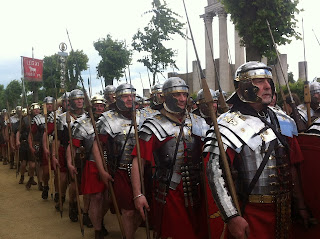 The 9th legion is the legion that appears in Vengeance of a Slave. It has an interesting history.
It was known as Legio IX Hispana, or the 9th Spanish Legion. It existed from the 1st centuryBC until around 120AD. It was said to have been founded in Hispania (modern Spain) by Pompey around 65BC.

They are one of the oldest Roman legions. They were taken over by Julius Caesar when he became Govenor of Hispania. They fought all across Europe with Caesar and came to Britain with him when he made his ill-advised invasion in 55 and 54BC. At this time, the Romans did not manage to conquer Britain, although Julius Ceasar empbroidered the truth a bit in order to boost his credentials in Rome.

The 9th came again to Britain, along with three other legions, in 45AD with Claudius's more successful invasion. It took 4 entire legions to subdue the Britons.

The brutal rebellion of Boudicca, in which 70,000 civilians were slaughtered brought more conflict for the 9th legion. They were the first legion to fight Boudicca's army and they were routed.

They had, however, bought time for the rest of the army to come down from Angelsey where they had been subduing the druids. They met Boudicca's hordes in the Midlands, and, along with the remnants of the 9th, they fought and won, even though they were outnumbered 10 to 1.

It was Roman discipline that won the day against the ill-disciplined hordes of Britons.

In Vengeance of a Slave, Ailbert realised this when he planned his raids against the Roman army.
When they conquered the Brigantes in the north of Britain, the 9th was stationed in York. But there were still the wild tribesmen of what the Romans called Caledonia, and we call Scotland. For the Romans to feel safe, these tribes needed to be subdued. and so the 9th was sent there.

In 64AD, under Agricola, the 9th met with the Caledonian tribesmen in open battle. The Romans won. They had slaughtered many of the Caledonians.

For a while, all was peaceful until 117Ad when the 9th again went north to supress the Caledonians. That was the last anyone ever heard of them. They never returned. Were they all killed in battle, or were they lured into the bogs and mires of that wild land? No one ever found out.

Please add a comment to this post and let me kow how you liked it.
Posted by V.M.Sang at 00:00