Interview with Kimi from The Wolves of Vimar Series 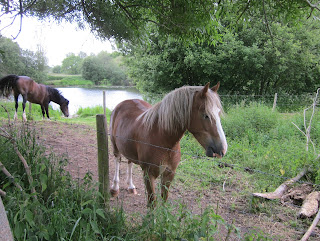 I interviewed Kimi, Davrael's wife. You may remember I interviewed Davrael some time ago.. Here is what she told me.
Me: As you know, I have interviewed your husband,
Davrael. He told me something of the life on the Plains.
Perhaps you can tell me something about how you two met.

Kimi: Of course. It will be a pleasure. As you know, Davrael
is from a nomadic family. One of the Tribes. They travel the
Plains following and herding the horses that roam across
them.

Me: The horses are free then? Don't they belong to the tribe?

Kimi: Yes, each tribe calls particular herds their own, and
they brand them when young to show their ownership, but
most of them are wild and free. I am from the settlers. We
once roamed the Plains just like the Tribes, but our
ancestors decided to settle in order to have more control
over the breeding of our horses. They thought that they
could breed better animals that way.

Me: And did they?

Kimi (smiling): There are still arguments about that.

Me: How did you and Davrael meet then?

Kimi: One day I was out riding with my brothers when we were attacked by a group of Tribesmen.

Me: Was one of  them Davrael?

Kimi: Oh, no. It was an enemy tribe of the Swooping Hawks. They are called the Howling Coyotes. The Tribes have never liked the settled folk. They think we have abandoned tradition and the settled folk think that the nomads are primitive people, so there was no love lost between us. Anyway, my brothers tried to fight them off but there were too many of them and they took me with them. I think they wanted to marry me to one of their men. They did raid sometimes for both horses and women.

Me: Where did they take you?

Kimi: They took me to their camp several days away. It wasn't their main camp. In fact they had strayed into the territory of the Swooping Hawks. That was why the trouble began.

Kimi: Yes. A band of Swooping Hawks came upon the camp and a battle began. I know little of that battle because I was tied up in a tent, but I could hear the noise--shouting and screaming. Then it suddenly went quiet. I heard a voice commanding the capture of all the horses and a search of the tents. After a while, a man came into my tent. I was petrified. He was an imposing-looking man, although not really handsome, with long hair held back by a braid around his head. What was the most terrifying, though, was the tattoo of a hawk on his face. I tried to hide, hoping he wouldn't see me and that I could somehow escape, but he was too observant and saw my little wriggles behind a bed. He lifted me out and said, 'What have we here then? A little mouse trying to escape the hawk?' He laughed at my frightened expression and continued, 'Well, it seems the hawk has caught the mouse after all.'

Me: This was Davrael I assume.

Kimi: Yes. He freed me of my bonds and told me that I would be well treated. He asked me where I had come from and what tribe I belonged to. I told him that I was not a tribeswoman and where my family were settled. He agreed to take me back to my family if I could assure him that they would pay in horses for my return. Coin has little meaning for the Tribes. They count their wealth in their horses and trade by barter, you see.

Me: Did you give him this assurance?

Kimi: Yes. I was confident that my father would pay him whatever he wanted.

Me: So he took you back to your family?

Kimi: Not immediately. Davrael and his men were out searching for some horses that they suspected that the Howling Coyotes had stolen. They were some of his best animals. Beautiful golden horses with silvery manes and tails they are. Come to think of it, their manes and tails are almost the colour of Randa's hair!

Me: Where did he take you?

Kimi: Well, I rode with them for quite a long time actually. Some of the horses had strayed a long way, and some had even been taken to the territory of the Howling Coyotes. There were a few battles, but eventually he got them all back. Every evening he would come into the tent he had said was to be mine and we would talk. Gradually I learned that he was not the fearsome warrior I had thought, but was, in fact, quite a gentle perso, although he could fight well when required. He was kind to me and I gradually began to fall in love with him. I was surprised when he told me that he reciprocated my feelings.

Me: There were problems though I understand.

Kimi: Yes. This is quite painful for me to relate. Davrael took me to his father and told him that he wanted to marry me, but his father flew into a rage and said that no son of his would marry a settler. We the went to my family. They were delighted to see me as  they had given me up for dead or worse. When Davrael and I eoldthem of our love, my father said that there was no possible way that he could allow it. He offered Davrael two of his best horses if he would go away and forget about me.

Kimi: No. We met in secret for a time, but then decided that it was impossible to live like that and so we decided to elope.

Me: You went to Grosmer then.

Kiki: Yes. We went to Grosmer. If all that had not happened, or if either of us had obeyed our fathers, then we would never have met Carthinal and the rest of the Wolves. I wonder what would have happened then?

Me: Thank you very much, Kimi.


If you want to find out more about Kimi and Davrael, you can buy The Wolf Pack by clicking on this link.